Apache 207 at the forefront: No artist is at the top of the songs streamed most frequently on Apple Music in Germany this year more often.

Even world stars like Billie Eilish (18) or Harry Styles (26) are nowhere near the popularity of rapper and singer Apache 207 (23) in Germany – at least in the Apple Music annual charts. No other national or international artist is represented in the first 25 ranks in the German top list even nearly as often as he is. The 23-year-old secured third place with “Roller”, “Why are you doing this to yourself?” comes in sixth, followed by “200 km / h” on number seven, “Fame” on number 15, “Doch im Nacht” on number 20 and “Bluish” on number 21. Seven more songs by or with Apache 207, including a collaboration with Sido (“2002”), are also in the top 100.

The US rapper Roddy Ricch (22) dominates the world’s top ten most streamed songs. With “The Box” he lands on number one, together with DaBaby (28) and the song “Rockstar” on number four, and with the song “Ballin ‘” together with Mustard (30) in tenth place. The Weeknd and Tones And I rank second and third here. “Life is Good” by Future (37) and Drake (34) secured five, Dua Lipa sixth and Post Malone (25) landed seven with “Circles”. Eilish ranks eighth and Lil Baby (26) can claim nine with “Woah”.

Previously, Apple published a ranking of the most popular podcasts on “Apple Podcasts”. In 2020, “The Coronavirus Update from NDR Info” tops the list, followed by “Crimes” from “Zeit Online” and “Baywatch Berlin” with Klaas Heufer-Umlauf (37). The top five fill “One Hour History – Deutschlandfunk Nova” and “Dick & Doof”. The two popular podcasts “Fest & Flauschig” with Jan Böhmermann (39) and Olli Schulz (47) as well as “Mixed Hack” by Felix Lobrecht (31) and Tommi Schmitt (31) are not included because they are exclusively available on Spotify.

Architects want a “German Wembley” in Berlin: A “national stadium” in...

Maurer trial continues, but without a witness “Willi” 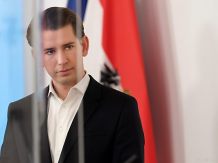 Hungary and Poland remain tough in the EU financial dispute –...