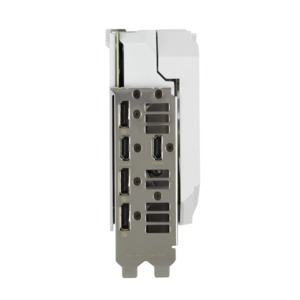 However, nothing more than the appearance has changed with the cards mentioned. All specifications have remained the same. ASUS increases the boost clock of the ROG Strix GeForce RTX 3090 OC from 1,700 to 1,860 MHz. But this only applies to gaming mode. The card offers a boost clock of 1,890 MHz via software in OC mode. We tested the card in gaming mode. In the linked article there is a table that shows the differences between the various modes. Otherwise, the top model from ASUS with the GA102 GPU offers a whopping 10,496 FP32 processing units. In addition, there are 5,248 INT32-ALUs, 328 third-generation tensor cores and 82 second-generation RT cores, which are responsible for the hardware acceleration of the ray tracing calculations.

In addition to the large expansion stage of the GPU, the 24 GB of GDDR6X are certainly the highlight of every GeForce RTX 3090. With a clock rate of 1,219 MHz and a 384 bit wide memory interface, the memory has a memory bandwidth of 936 GB / s. ASUS is also increasing the power limit of the ROG Strix GeForce RTX 3090 OC from 350 to 390 W. However, a further increase to 480 W is also possible.

In terms of dimensions, the ASUS ROG Strix GeForce RTX 3090 OC has a total length of 312 mm. The height is 140 mm. At the slot height, the ASUS GPU is 58 mm and thus occupies almost three slots.

The manufacturer has not yet given any details about the recommended retail price or a possible release date.

Donald Trump is happy to be away from Twitter

Court prohibits the protection of the constitution for the time being...