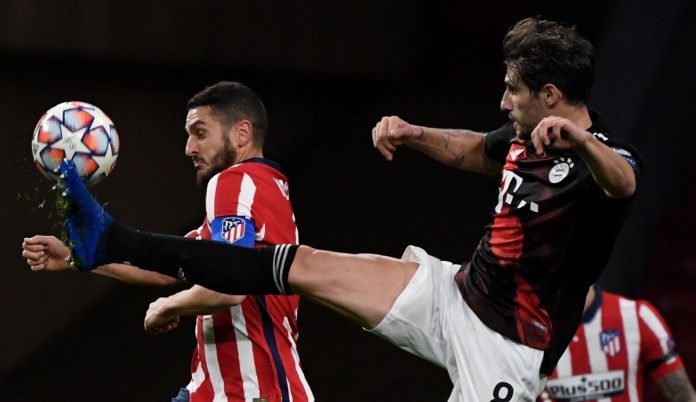 After 15 wins in a row, FC Bayern Munich failed to win a Champions League game, and on matchday 5 of the group stage it was an uneventful 1: 1 (0: 1) at Atletico Madrid (the highlights in the video). Since Hansi Flick’s team was already group winners before the game, the coach experimented personally and tactically.

Substitute Thomas Müller took out a penalty in the closing stages and converted him to equalize (86th). Previously, Joao Felix had put Atletico in the lead (26th).

“I’m very satisfied with the result. We tried to turn the game around in the second half and had more momentum in the game after replacing Thomas Müller or Serge Gnabry,” said Flick. “The young players did a good job too. It was a successful evening for us.”

Meanwhile, coach Diego Simeone’s team missed early qualification for the round of 16 with the draw. On the last day of the match, however, one point in a direct duel away from pursuers FC Salzburg is enough to advance.

Here is an overview of all voices.

Flick changed his starting XI to nine positions after the 3-1 win in Stuttgart. Only Alaba and Hernandez remained in the team, newcomer Nübel was in goal for the second time, defender Arrey-Mbi made his professional debut. The 17-year-old played on the left wing in a 3-4-3 system, which Flick only used for the second time after a 3-2 win against Paderborn in February 2020.

Just like his counterpart on the right Sarr, Arrey-Mbi also repeatedly revealed problems in positional play and thus gave Atletico opportunities. In the run-up to the 0-1 he was too easy to play on the sideline, in the middle, the recently disregarded Süle (for the first time in a month in the starting eleven) came too late against Felix (26th). Atletico’s leadership at the time was well deserved.

The newly formed team of FC Bayern had more possession, but Atletico had more penalty area scenes and deals. FC Bayern found no means against Atletico’s close-knit and well-shifting defensive rows and did not create any dangerous scoring opportunities.

The performance of the storm trio consisting of Sane, Costa and Choupo-Moting was particularly disappointing. Only Musiala occasionally provided creative actions from midfield, but did not finish them precisely enough. At halftime, the goal shot ratio was 10: 2 for Atletico.

FC Bayern was not more compelling in the early stages of the second half, whereupon Flick reacted: In the 60th, he replaced Arrey-Mbi, Sarr and Martinez with Richards, Gnabry and Müller and at the same time went for the usual 4-2-3-1 System around. The new players initially only marginally revived the game.

Atletico coach Simeone changed defensively and sent the wrong signal to his team. She withdrew further and further – and was punished. Müller took a penalty against Felipe and converted it to equalize himself (86th).

Atletico Madrid – Bayern Munich: The dates of the game

The star of the game: Joao Felix (Atletico Madrid)

Felix scored the interim 1-0 for Atletico and was the most noticeable player on the field. He had the most completions, fought the most tackles, and enlivened the game with creative acts like his first-half heel trick.

The flop of the game: Bright Arrey-Mbi (FC Bayern Munich)

Called up as a left winger, Arrey-Mbi never found himself in the game during his professional debut. He made some positional errors, had a large share in the 0: 1 and was substituted in the 61st with a duel rate of 0 percent.

The FC Bayern players in particular went tough in the duels, but Turpin still had the game well under control. Just before the break, he rightly showed Sarr the yellow card. His penalty decision was also correct.

FC Bayern Munich: The rest of the schedule in 2020

Record rainfall on the east coast of Australia

“Three hazelnuts for Cinderella”: where the classic runs at Christmas

Astrazeneca: Berlin clinics – many failures due to side effects