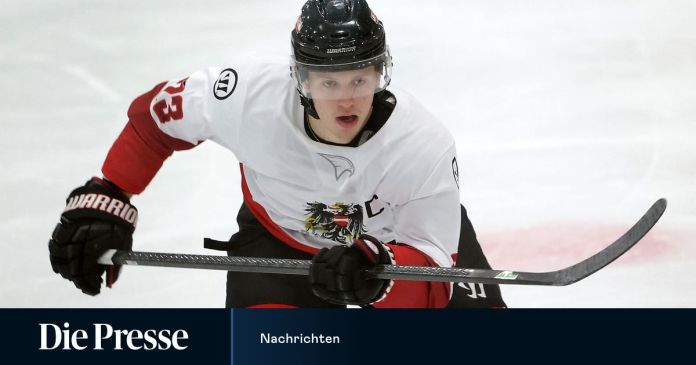 The ÖEHV selection also had to admit defeat to Russia, but scored the first goal of the tournament at 1: 7.

The Austrian U20 ice hockey team lost their third group game against the top teams at the World Cup in Edmonton, but they can still hope to make it to the quarter-finals. In the 1: 7 (0: 4.1: 0.0: 3) against Russia on Tuesday (local time), team boss Roger Bader’s team scored the first goal through Senna Peeters. The last group opponent is the Czech Republic on New Year’s Eve (8 p.m. CET / live ORF Sport +). A victory would bring the ÖEHV selection into the last eight.

So far, the Austrians have pulled out of the affair best against the Russians. With 18 shots, captain Marco Rossi and Co. fired more than the 0:11 against the USA and the 0: 4 against Sweden combined. The consolation goal to 1: 4 (28th) came from the former US legionnaire Peeters, who is now in action in Sweden. The assist was provided by the youngest player of the tournament, Marco Kasper, who was only 16 years old. Goalie Jakob Brandner, who plays in Finland, was hardly inferior to the previously outstanding standard goalkeeper Sebastian Wraneschitz and blocked 43 shots. Wraneschitz was spared for the last group game.

Coach Bader: “ Every game gets better”

Coach Bader was happy about a further increase in his team. “ It was definitely the best game for us at this World Cup. It was our goal to get better every game. We succeeded again. We had more scoring chances than in previous games and were also able to keep up with Russia better in terms of ice skating. Especially the second third was very good, “said the Swiss. There were also chances of a second hit. “The fact that we were able to win a third against Russia is excellent for our team.”

Belgian-born Peeters also saw further progress. “ We got used to the pace better in every game. We work harder and harder,” said the 18-year-old.

The last ÖEHV group opponent, the Czech Republic, had celebrated their only victory so far with 2-0 against Russia and is also in terms of potential above Austria. However, if the team of U20 coach Marco Pewal, who made it to the group of the world’s best with the boys but had not received approval from the VSV, the historic first victory at a World Cup, then the quarter-finals would be perfect.

Bader, however, knows about the class of the opponent who lost 7-0 to the USA last time. “The Czech Republic is also a great ice hockey nation. They have great defenders, the defense is very good. Anything can happen in a game. We dream of creating a sensation.”

Frankfurt: earlier than planned – Tempo 40 on important streets in...

Mutated coronavirus in the UK: “Up to 70 percent more contagious”