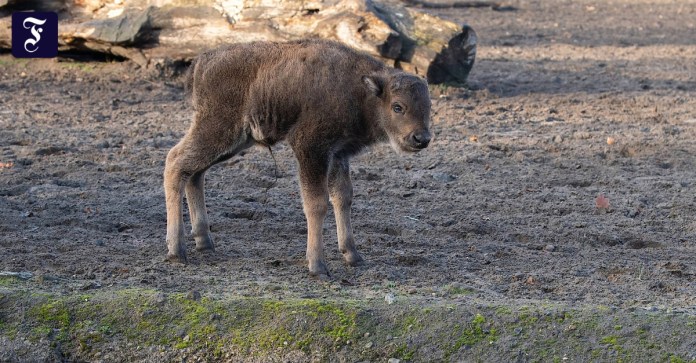 Ethe little bison bull Tian is still stalking around in the Berlin zoo. But it will be fine. Tian, ​​born on December 12th, has a perspective that is rare for zoo animals: one day he could wander around the Caucasus – without fences. Bull Beppo, who was born two years ago in the Berlin Zoo, has been living in northern Azerbaijan since November. Thanks to such reintroduction programs in cooperation with zoos, European bison are developing unusually well. They have now slipped one step down on the Red List of the International Union for Conservation of Nature (IUCN) – and are therefore considered less threatened.

Around 100 years ago, hardly any bison friend would have thought that possible. In 1927 the species was considered to be extinct after the last bull was shot down in the Caucasus. If it hadn’t been for a few zoo directors and private owners who had founded the Society for the Conservation of Wisents in Berlin four years earlier. As a forerunner of later European conservation breeding programs, they began to breed the animals under human care.

European bison have been reintroduced into the wild from zoos since the 1950s. Real Berliners now live in Romania, for example. In Azerbaijan, they are expected to roam freely in the approximately 130,000 hectare Shahdag National Park from spring. They are still in a large enclosure, practicing getting along with nature.

Originally, Tian’s mother Oria was also supposed to go to Azerbaijan. But since she was pregnant, Bulle Beppo first traveled east alone with conspecifics from other European zoos. Tian could follow him when he is two years old, says Florian Sicks, curator at the zoo. “So far nothing speaks against it.” Oria, who had her first cub in Berlin, has good chances. According to the zoo, the final decision depends on many factors in the reintroduction programs.

Massive skulls and muscular front bodies – bison have remained wild animals even in zoos. They have little in common with a cozy herd of domestic cattle. The barriers around the enclosure have to be very stable, reports Sicks – and the zookeepers carefully. Adult bulls can weigh around 800 kilos, grow to be almost 1.90 meters tall and three meters long. They are the largest European land mammals – and quite combative when it comes to ranking in the herd.

“It is an exception that a previously exterminated animal comes down from the high risk level again,” says Sicks. According to the IUCN, bisons have increased from 1,800 animals in 2003 to more than 6,200 in the wild. If this continues in this positive way, they may no longer be an endangered species in the near future.

According to the IUCN, the largest stocks are now in Poland, Belarus and Russia. Germany also has a small settlement project in the Rothaargebirge. According to the IUCN, 47 large herds are currently being observed across Europe. Some animals also have transmitters. However, the small gene pool remains a problem – and the wide range of animals, often without opportunities to meet.

Humans must continue to help in order to ensure sufficient genetic diversity through breeding books and targeted animal transports to the individual bison regions. In winter, additional feeding sometimes has to be done in nature – until there is enough pasture land for the wild herds without competition with domestic livestock.

“It will be decades before everything grows together regionally,” says Sicks. Around 20 animals from numerous zoos now lived in Azerbaijan. But bisons are not rabbits – they reproduce very slowly. Even in Berlin there is not a young animal every year. A long tradition for this – bisons have been part of the zoo’s population since 1872, and in the then newly opened zoo since 1955. More than 200 of these wild cattle were born in Berlin.

Regions like the Caucasus also benefit from resettlement. “Because of their large need for food, bisons have a considerable influence on the vegetation,” explains Aurel Heidelberg, an expert for the WWF. “Thanks to them, open areas are created in the forest and thus clearings and sunlight down to the ground.” This supports the structuring of the mountain forests with niches for many other animal and plant species. The reintroduction project is a joint initiative of the Azerbaijani Ministry of the Environment, WWF and the European Association of Zoos.

The lockdown is coming – these rules apply to Christmas and...

Most important questions and answers about the effect of the vaccine

Moderna wants to apply for approval for vaccine in EU –...