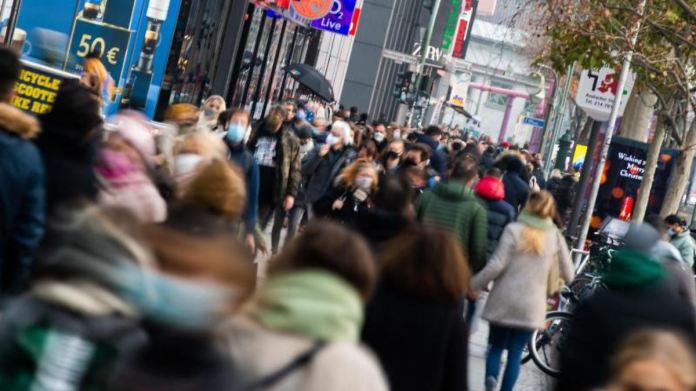 Berlin (dpa / bb) – The last open day for large parts of the retail trade in Berlin was used by numerous people for their Christmas shopping. As on the day before, long queues formed in front of the shops at Alexanderplatz, in which people mostly kept their distance. Many customers were also waiting in front of the entrances in Friedrichstrasse on Tuesday. However, the shopping streets were not packed. In any case, only one customer is allowed in the shops per 20 square meters of retail space. The people had a correspondingly large amount of space.

Large parts of the retail trade will have to close from Wednesday. Only grocery stores, drug stores and pharmacies are allowed to continue to open in lockdown. The federal and state governments agreed on this at the weekend. This means that the Sunday shopping in Berlin, which is planned for the coming weekend, will also fall, as the Senate Department announced.

Hairdressers and cosmetic salons also have to close from Wednesday. That is why many of them opened spontaneously on Monday, the industry’s actual day of rest. But it wasn’t really full in the factories.

Even if many people used the last days of shopping again, brick-and-mortar retail is experiencing extremely poor Christmas business due to the Corona crisis. As far as the number of customers as well as the turnover are concerned, according to the Berlin-Brandenburg Trade Association, the entrepreneurs on the past Advent weekends remained in some cases well below the usual level of previous years.

Airlines are optimistic for 2021

Handball: Rejection in Cologne as a memo for the World Cup

Health – Berlin – Berlin gets less vaccine: Can better use...

Thorsten Fink: An interview with the new BLICK expert

Corona pandemic – German lockdown is to be extended until April...