Bettina Jarasch has passed the first hurdle: The Berlin Greens are fully behind the 52-year-old realpolitician, who they elected on Saturday with almost 97 percent without a single no vote as their top candidate for the House of Representatives election in autumn 2021. Franziska Giffey, as the designated top candidate of the Berlin SPD, was unable to achieve such a result with her comrades – she was elected state chairman at the end of November at the hybrid party congress of the Berlin SPD with 89.4 percent votes, her free choice as a candidate is still pending.

However, a comparison of the two appearances also shows where Bettina Jarasch still has to catch up: In her application speech as SPD party leader a few weeks ago, Franziska Giffey scored points with her experience as Neukölln District Mayor and Federal Minister: She spoke freely, convincingly, empathically, man felt the security of a woman with leadership experience and a lot of routine with public appearances even in stressful and exceptional situations. There she was: a woman, Wowi 2.0., East German.

There is still a way for Bettina Jarasch to assert oneself against Giffey, as her speech on Saturday at the digital election convention showed.

It was a good, thoughtful speech in which Jarasch repeated the key points that she had already made when she was presented as the Greens candidate in October. She didn’t seem aggressive or overflowing with ideas, sometimes even a little nervous. That may have been due in large part to the digital format, the audience in the hall was missing and with it the applause and the atmosphere. But it was no different with Franziska Giffey.

Jarasch focuses on green core topics: traffic turnaround, climate protection, socio-ecological transformation of the economy, securing and creating jobs and housing policy. When she was introduced in early October, she said she was a bridge builder. She then repeated these points – without setting new accents or presenting new ideas. You want to forge alliances, so Jarasch, with everyone who wants to shape the future. It’s a thick board. And not without danger, because it can bring the traditionally left-wing national association into conflicting goals if it wants to talk to everyone.

Also with large residential groups like Deutsche Wohnen or with investors for whom a radical left, green building councilor and activist like Florian Schmidt in Friedrichshain-Kreuzberg does not even give appointments. Jarasch is a compromise candidate that the two aspirants for the top candidacy, Senator for Economics Ramona Pop and parliamentary group leader Antje Kapek, were able to agree on. She doesn’t rumble around, doesn’t act riotously. She is cultured, her tone is matter-of-fact, and you can tell how serious she is about the issues. Bettina Jarasch is one of the pragmatic Greens with a moderate attitude.

Jarasch should be able to speak to almost all other parties

So she could well have sympathy in the SPD, CDU or the liberals. The Catholic and Kreuzberger woman with constituency in Pankow will not offer any personal attack surfaces. Whether the party links support and recognize Jarasch will be seen in the election campaign. In her time as state chairman from 2011 to 2016, she was able to reunite the completely divided party together with her co-partner Daniel Wesener.

It will be difficult for Bettina Jarasch to assert herself

On Saturday, the green top candidate quoted a few lines from the Seeed song “Dickes B!”: “Dickes B, up on the Spree, you are good in summer and it hurts in winter.” In between, there is the autumn of decisions. And a way.

Corona news on Tuesday: Switzerland is looking for 10,000 British people...

Does Dominic Thiem have a new girlfriend?

Cleaning surfaces and office equipment in times of Corona 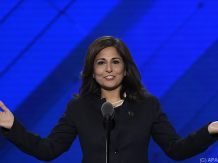 Cinemas suffer from Corona: around 80 million fewer visitors in German...

Women at the top of the group: “Equality is established when...

Matthias Walkner is looking for a podium at the Dakar Rally