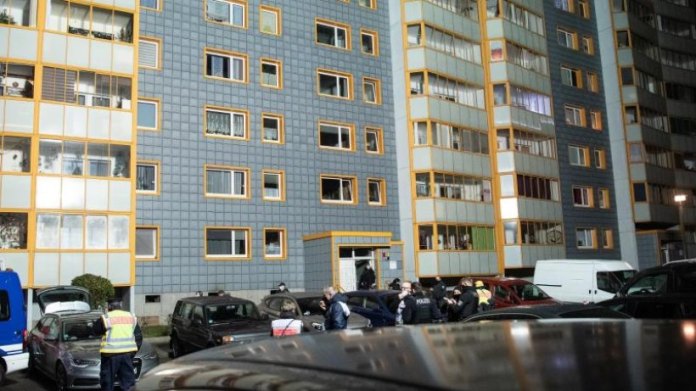 After a cellar fire in a skyscraper in Berlin-Lichtenberg, residents had to stay with friends or in a hotel.

Berlin. After the cellar fire on Christmas Eve in a high-rise building in the Neu-Hohenschönhausen district, 168 people will probably only be able to return to their apartments in the New Year. Two entrances to house number 24 in Ahrenshooper Straße were completely blocked, as a spokeswoman for the Lichtenberg district office said. Previously, there was initially talk of a staircase. The residents of 88 affected apartments had the choice of either private accommodation elsewhere or of a hotel organized by the district.

67 people were accommodated in a hotel, according to the spokeswoman. The residents don’t have to pay anything for it. The Arbeiter-Samariter-Bund will initially provide food for three days. According to the information, the housing company is now trying to organize accommodation in apartments with kitchens because of the unexpectedly long stay. Because in the hotel the residents couldn’t cook for themselves.

After cellar fire: Two elderly couples isolated in a hotel after a positive corona test

According to the spokeswoman, a medical officer had tested everyone who wanted to go to the hotel for the corona virus on Thursday evening. Two elderly couples would have had a positive result with no symptoms. They were isolated in two rooms in the hotel. You should also have a PCR test carried out on them. The results of the test might be available on Saturday.

On Thursday, parts of a power distribution system and adjacent cellar sheds caught fire in the building complex. According to the police, the cause is still unknown. The fire brigade came with more than 100 emergency services. The fire itself was not big, the fire department said. But there was heavy smoke. The fire was extinguished after a good hour. One person was taken to hospital with suspected smoke poisoning.

No water and electricity after cellar fire in Hohenschönhausen

Due to the spread of smoke and the damage in the basement, the decision was made to turn off the water and electricity, the fire department said. The heating is therefore not working either. The apartments are therefore not habitable, said the spokeswoman. However, the residents could enter these at any time and get objects or things they needed. As the spokeswoman for the district office said, the power distributor is so badly damaged that it cannot be repaired immediately.

In the meantime, according to the spokeswoman, it was feared that not only the entrances to house number 24 would have to be closed to residents. But the landlord has meanwhile been able to provide electricity and water again in the apartments at the adjacent house numbers, so that they remain habitable. But the district office also offers them support.

The health of the affected people is fine, said the spokeswoman. A pregnant woman was taken to a hospital to be on the safe side, but left it again soon. “The people are doing well.”

Neuhaus, Camavinga & Co. – These are the next names on...

How Commerzbank is fighting for survival

Interpol warns: “We will see raids on vaccine shipments”