Less than six weeks after the election in the USA, the future President Joe Biden clears another important hurdle before his inauguration. The 538 electors meet and elect the future president.

In the 50 US states and the capital district of Washington, a total of 538 electorates will meet on Monday to vote on the future president. In the vast majority of states, the election winner gets all the votes of the local electorate. According to the certified results, Democrat Biden accounts for 306 electorates and 232 for Republican incumbent Donald Trump. The result will not be officially announced until January 6th in Congress in Washington.

Biden is due to be sworn in on January 20th in Washington January. Trump continues to oppose his defeat in the November 3 election. The president is elected indirectly in the United States. The winner is whoever can unite at least 270 voters. On Monday, each elector will receive their own voting slip, which will be signed and sent to Vice President Mike Pence in his capacity as President of the US Senate. Copies are sent to other state and federal government institutions. Biden announced that he would speak on Monday evening (local time).

More than 50 lawsuits against election results

The voting of the electors is usually a formality, because the losing candidate usually admits his defeat on election night. But Trump still claims that he actually won the election and sees himself deprived of his victory by fraud. He wrote on Twitter on Sunday: “How do states and politicians confirm an election in which corruption and irregularities are consistently documented?” Neither Trump, his lawyers or his supporters have provided evidence to support their allegations.

The Trump camp has so far failed with more than 50 lawsuits against the election result. On Friday, the Washington Supreme Court also dismissed a lawsuit aimed at overturning Biden’s victory in four states. Trump announced in an interview broadcast on Sunday by the broadcaster Fox News that he still wanted to continue fighting his defeat legally. “It’s not over,” he said. There are still “several local cases” in states in which his lawyers are taking action against the election result. Trump is not given any real chances.

Trump had sharply criticized the Supreme Court’s decision on Saturday. «That is a big and scandalous miscarriage of justice. The people of the United States have been betrayed and our country has been embarrassed, ”he wrote on Twitter. Trump again claimed that he won the election with a “landslide victory”. There is no basis for this. On the weekend, Twitter provided several Trump tweets with warnings that the manipulation it claims was controversial in the election.

Justice Minister William Barr was also in Trump’s sights on Saturday. The Wall Street Journal reported that Barr had known about investigations against Joe Biden’s son Hunter Biden since the spring. Barr wanted to keep this investigation out of the election campaign. Trump retweeted a Twitter message calling for Barr’s dismissal if the report was true. The President wrote: “A great disappointment!”

All states have verified results

The Supreme Court had already rejected a request for an injunction last Tuesday that the Trump camp wanted to overturn Biden’s victory in the state of Pennsylvania. Critics suspect that Trump’s refusal to acknowledge his defeat was an attempt to continue collecting donations from supporters. Trump’s team is still calling for donations to support the lawsuits. It is only from the small print that it becomes clear that the majority of the funds will go to an organization that Trump could also use for other political purposes.

The relevant US authorities had declared the choice to be the safest ever in the US. Most recently, Attorney General Barr had also said that there was no evidence of fraud to the extent that it could change the outcome. All 50 states and the capital city of Washington have certified their results.

After the death of the liberal judge Ruth Bader Ginsburg in September, Trump had put pressure on to quickly fill the seat on the Supreme Court with the conservative lawyer Amy Coney Barrett before the Supreme Court election. He also referred explicitly to a possible dispute over the outcome of the election. The Conservatives now dominate the court with a majority of six to three votes. However, the Trump camp’s previous lawsuits have been dismissed by judges regardless of whether they were nominated by Democratic or Republican presidents.

“Like scene from horror movie”: Will the flood stop the mouse...

Vaccinations with AstraZeneca are running again – hardly any cancellations |...

Finland: Customs should do without corona detection dogs – Panorama

RTLZWEI scores with social reports from Frankfurt and Hamburg (PHOTO) 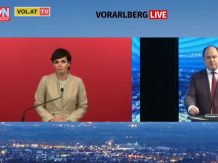