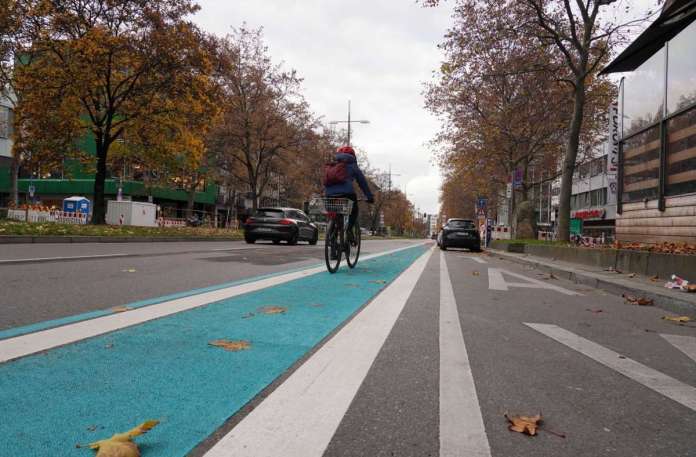 The city administration is starting the preliminary planning for two lanes along the inner-city federal highway 27. Five trees will be felled for this.

Stuttgart – Three years ago the Stuttgart municipal council decided to dismantle all above-ground parking spaces within the city ring and to make it more attractive with pedestrian zones. “Livable inner city for everyone” was the target resolution. It will take at least another three years before something of this change becomes visible along Theodor-Heuss-Straße (B 27). For comparison: the American moon flight program lasted eight years.

The council’s technical committee decided on Tuesday to start planning the construction of 670 meters of cycle path on both sides of the city motorway from Rotebühlplatz to Bolzstraße. The so-called cycle expressways are to be three meters wide, as are the two car lanes in each direction. In order to eliminate the Landesbank’s parking spaces on Kleiner Schlossplatz, the administration has to negotiate with the financial institution, as well as with leaseholders who, according to the preliminary planning, should in future only access and leave the underground car park in Kronprinzstraße via Rotebühlplatz and not via Theodor-Heuss and Lange and Gymnasiumstraße. There is also a contract from 1975.

Five trees have to be felled

Five trees are to be felled for the cycle path towards Bolzstrasse, the bus stop at Kleiner Schlossplatz and for parking cargo bikes. Nobody debated this in the committee, but the controversy turned out to be the receipt of eight charging points for electric cars, which the Central District Advisory Council rejected. Why the administration treats e-charging places differently than conventional parking spaces does not make sense, said Kai Goller (AfD), these could also be relocated to underground garages. Building Mayor Peter Pätzold (Greens) accepted the exam.

Competition for B 27 is coming up

Pätzold protested against attacks by the left-wing faction, which referred to the outstanding urban development competition for the redesign of the B 27 between Österreichischer Platz and Pragsattel. “How can the current planning react to the results of the competition?” Asked Christoph Ozasek (left). His group wants to have checked an extra bus lane on the Cityring. The big competition will “not come quickly”, said Pätzold, it is planned for 2021, moreover it is an idea and not a realization competition. “The implementation now does not obstruct anything, but it creates a better cycling infrastructure,” said the mayor, adding that implementation has to be done in some areas. Hannes Rockenbauch (SÖS) advised that the competition “be taken seriously” and that the knowledge gained from it flow into the planning for Theodor-Heuss-Straße. The cycle paths should not be built before 2023; the money for this would first have to be approved in the next double budget.

Corona mutation and lockdown in Germany: This junk shop is extremely...

This is what the 7-day incidence currently looks like in your...

Poverty statistics 2019 – one in eight people in Switzerland struggles...