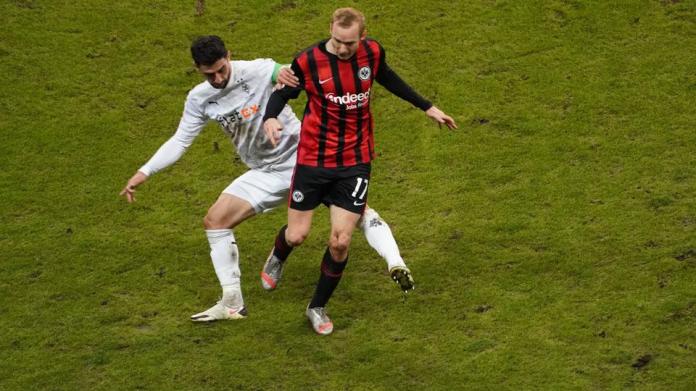 Even a magic goal is currently not enough for Eintracht Frankfurt to win. Against Borussia Mönchengladbach, the Hessians turn the game on Tuesday and then give up the three points again.

Eintracht Frankfurt drew 3: 3 in their home game against Borussia Mönchengladbach. The guests initially took the lead with a direct free kick from Lars Stindl (14th), before André Silva with a brace (21st FE, 24th) and Aymen Barkok with a dream goal (32nd) turned the game around before the break. Captain David Abraham saw the yellow-red card in the 81st minute. Again Stindl with a foul penalty (90th) and head (95th) ensured the final score.

The game started very badly for the Hessians. Only Borussia Mönchengladbach played in the first twenty minutes, Matthias Ginter already had the lead in the 4th minute when he shot free in front of Eintracht keeper Kevin Trapp. At the latest when Stindl turned a direct free kick into the right corner in the 14th minute (14th), the Champions League team from Gladbach seemed on course.

Little or nothing came from the Hessians, all the more surprising was the turn that the game took in the 20th minute. After a corner, Laszlo Benes got the ball from close range from Martin Hinteregger, and Silva safely converted the penalty. From then on, Eintracht was the game-determining team, the guests only ran after them. The Portuguese first refined a dream pass from Barkok into the run of Silva with a wonderful ball acceptance, then with an ice-cold finish in the far corner (24th). Suddenly the Hessians were leading.

And then came the big entrance from Barkok. After a pass from Silva, the Eintracht-Eigengewächs let several opponents get out in a small space in the sixteenth, straightened the ball with the sole and pushed it casually to 3-1 into the far corner (32nd). A breath of Okocha was blowing through the Frankfurt city forest.

But the high after the dream goal should be followed by a real low. The Gladbachers, who were so superior at the beginning, were initially happy not to concede a fourth goal. After the break, for example, Amin Younes, who later had to leave the field injured, could have scored his first goal in the Eintracht dress, but forgave.

But after a yellow-red card for Abraham (81st), the game tipped over again. First Barkok brought Breel Embolo down in the penalty area, Stindl scored a late goal (90th). Only five minutes later it was Stindl again, who headed off to the last-minute draw. A draw that should feel like a defeat for Hessen.

Rapinoe contradicts Biden: “This is America”