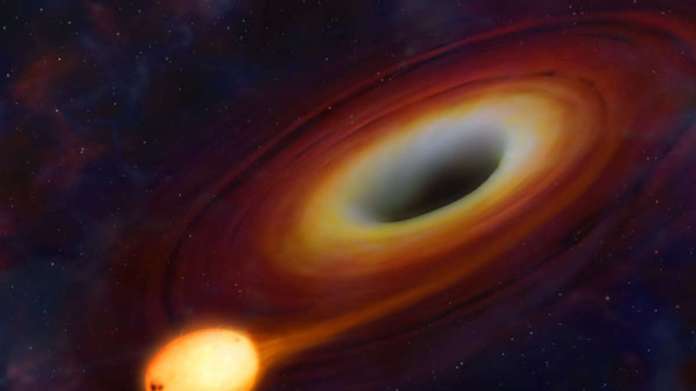 Black holes appear mysterious and dangerous. However, one theory now suggests that our universe itself could be a black hole.

Munich – Researchers assume that black holes are the centers of Galaxies or could even be about their origin (* Merkur.de reported). For example, in the middle of our Milky Way there is such a cosmic object with a name Sagittarius A*. According to measurements, the black hole has more than four million times the mass of our sun * and because of its enormous pulling force density anything that comes too close to him.

So far, not much is known about the cosmic objects – the first photo of a black hole was only recently taken. * However, a daring one is currently in circulation theory to black holes. According to this, not only should a great many of them be found in the centers of Galaxies of Universe are located. According to new calculations, it could be ours universe possibly even a Black hole act. At least attentive readers of the textbook “Modern Physics” by Gehrke and Koberle made this assumption.

A black hole has the same mass as the universe – coincidence?

In the work there is an equation for the temporal development of the scale factor – this gives the relative expansion of the Universe at. The trade magazine spektrum.de regularly answers questions from its readers, some of whom noticed something unusual while recalculating this function. Because the Mass of a flat one Universe apparently corresponds to the mass of one Black hole.

“The manageable universe is in the order of 100 billion Galaxies with an average of 100 billion stars, ”will a reader of the Trade magazine cited, and further: “Since the diameter of a black hole is proportional to its Mass the diameter of a corresponding black hole would be approximately […] ten billion light years. That’s roughly the size of the known UniverseSo we live in one Black hole?

This question arose because of the unexpected agreement among the Calculations apparently some readers of spektrum.de, which is why the specialist magazine der theory and discovered a mistake in the equation: The readers put the evenly distributed Crowds of Universe with the centered mass distribution of a Black hole equal.

However, according to that Trade magazine not right. The background is that the event horizon is a static one Black hole is the seemingly visible edge of a spherical surface that does not let light through – its radius is called Schwarzschild-Radius.

Errors in the calculations – experts clarify

It is different with the so-called Hubble-Radius which is observable from our earthly point of view universe defined and the light can “cross in both directions” without problems, as in the article of Trade magazine is explained. “It depends on the observer one Black hole from where its horizon lies. The radius of the falls only for a static observer at infinite distance horizon together with the Schwarzschild radius. “

That means: The horizon is always between himself and himself for an observer Black hole – “even if he does Schwarzschild-Radius has already crossed inwards ”. The answer to the question of whether it is ours universe If it is a black hole, it is therefore very clear: no. The result is therefore more likely a coincidence. * Merkur.de is part of the Ippen network.

In the south of Duisburg: illegal gambling party dissolved

Nord Stream 2: Baltic Sea pipeline is to be further built...

Police are looking for missing ten year old – helicopter use