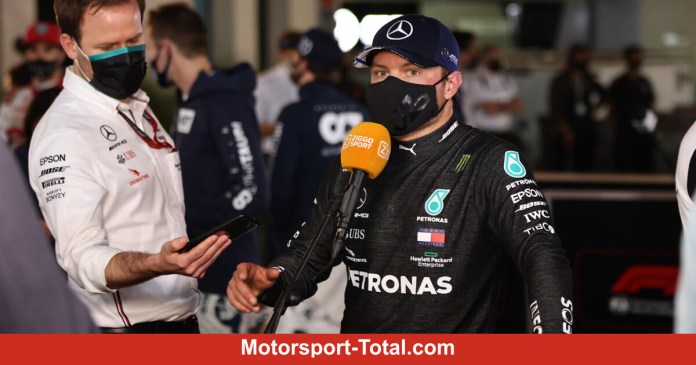 Will Hamilton be able to drive in Abu Dhabi?

“It’s pretty ugly what he happened there,” said Mercedes team boss Toto Wolff during a media talk by ‘Sky’. “And if you are not at home, but lie in your room, that is of course uncomfortable.” But he is confident that Hamilton can deliver a negative test by Thursday or Friday.

However, it is questionable whether that will be enough to take part in the season finale. That depends on the entry and exit regulations in Bahrain and Abu Dhabi. Exceptions are made for Formula 1, the paddock traveled to the emirate on Monday as a closed “biosphere” by charter flights – without Hamilton.

As long as he participates in a practice session or qualifying on Saturday, Hamilton can also drive the race. This is what it says in the regulations.

– Wolff: “Pretty ugly” what happened to Lewis there

– Bell jar: That’s how strict the corona rules are for the final

– What could prevent Hamilton’s start in Abu Dhabi

Lewis Hamilton spoke up for the first time in a week. The Brit posted a video message on social media in which he reports from the quarantine in Bahrain. “I hope you are fine. I know that I didn’t get in touch last week, but that was one of the toughest weeks in a long time,” said the world champion.

He tested positive for the coronavirus on the Monday after the first Bahrain race and has to isolate himself until tomorrow Wednesday. It has not yet been determined whether it will drive in Abu Dhabi. “I focused on getting well again and getting in shape so that I can get back into the car and race.”

Today he was able to train again for the first time and he feels good again. “I just wanted to let you guys know that I’m okay.” He also thanks for the many wishes for wellbeing. “I hope to be back in the car soon.”

Sainz was stopped on his hunt

Carlos Sainz almost finished on the podium on Sunday. The McLaren driver missed third place by just seven tenths of a second and was unable to make a final attack on Lance Stroll. But the basic problem was different: unfortunate timing. McLaren team boss Andreas Seidl has to admit that Sainz was slowed down by the team’s strategy “on his hunt”.

He was the best-placed two-stopper in the race and had bad luck with the VSC (drove in too late for the second stop) and the safety car phase afterwards. “Lance and Esteban benefited from the safety car because Carlos was on the hunt with his fresh tires.” The victory would probably not have been possible without a second stop. “Checo just flew. We can’t keep up with that at the moment.”

The best congratulations from home

After his first win, Sergio Perez received a special call from home from his wife Carola and son Checo junior. Of course, the little one followed the race and proudly reports that his dad won this time.

So we want to take another look at Sergio Perez’s decisive maneuvers in the Sachir Grand Prix. Lance Stroll and Esteban Ocon had no chance against the Mexican.

Romain Grosjean reported on Twitter that his Instagram account was hacked. Apparently Renault Junior Christian Lundgaard also got it. Colleague Luke Smith then speculated whether Bottas’ profile was hacked and only his description changed? We hope not.

Mercedes dominance in one number

While we’re at the lead, let’s take a look at the team statistics. A reader wrote earlier that the Mercedes dominance looks even worse in numerical form …

You can find all leadership laps and further statistics in our database!

… in this graphic. I took a closer look at most of the lead laps in the 2020 season after 16 of 17 races. Surprisingly: Max Verstappen is behind Lance Stroll. At least the Red Bull driver is “Best of the Rest” behind four (more or less) Mercedes drivers in this ranking.

We change the subject. AlphaTauri officially announced today that Yuki Tsunoda will take part in the Young Driver Test in Abu Dhabi on Tuesday after the season finale. The Japanese, who finished third in the Formula 2 championship, is considered the most promising candidate for Daniil Kwjat’s place for the 2021 season.

Already in Imola he was allowed to test with AlphaTauri, he completed 350 kilometers in a 2018 bolide. “I can hardly wait to try out the current car,” said the Japanese, who is supported by Honda. “My focus will be on following the instructions of the team and giving my feedback to the engineers. It will also be a chance to learn as much as possible and will help my personal development.”

By the way, Vettel’s team-mate Charles Leclerc got a straight 5 from us this weekend. The Monegasse has overtaken again too over-motivated – we remember the Ferrari crash in Austria or the collision with Lance Stroll in Russia.

Spoiler: Vettel himself doesn’t do much better either …

Charles Leclerc (5): In terms of pace in qualifying with P4 sensational, but with his over-motivated action on the first lap he ruined his race and with it his grade. The 5 is there because he also took Verstappen (and almost also Perez) out of the race. That will not do.

What’s going on at Vettel and Ferrari?

Unfortunately, you have to ask yourself that again after the second Bahrain race. The Heppenheimer could not benefit from all the mishaps of the competition and crossed the finish line outside of the points. After that he didn’t want to talk about it anymore.

The former love affair between Vettel and Ferrari seems to be broken. Ralf Schumacher and Timo Glock analyze that on ‘Sky’. “Sebastian is just a person like everyone else. If you’re a driver, you have to have an environment that works. You want to feel comfortable there, but you also want to feel needed and wanted,” says the Formula 1 expert . “And Ferrari has now solved that so unfavorably,” says Schumacher.

You can read the entire analysis here!

While we are talking about suffering Finns, we also have to briefly talk about this scene in the video. Kimi Raikkonen has already looked better, you have to honestly say. How does the “Iceman” explain the spin in the first lap?

“I got off to a good start, but at the exit of turn 2 I hit the curb too much and turned. That didn’t matter for the final result.” Overall, of course, he is not satisfied with 14th place. “We just had no pace most of the time in the race. The first five or six laps on the fresh tires were good, but after that we fell like crazy.”

Video analysis: “That was really a big number!”

Talking about new stars and fuck-ups – our latest analysis video with my colleagues Christian Nimmervoll and Stefan Ehlen is about that. They rework the big emotions and little stories of the Sachir Grand Prix, you can’t miss that.

The columns on the Sachir race:

A star is born: will George Russell drive for Mercedes in 2021? There is a lot to talk about after the Sachir Grand Prix in Bahrain … Last night More Formula 1 videos

Video: The repetition of the Mercedes breakdown

And yes, we have to talk about that again briefly. It was probably one of the biggest mishaps that happened to the Mercedes team. A “colossal fuck-up”, as Toto Wolff so aptly put it. For George Russell, the pit stop mishap meant that he was robbed of the lead.

“Of course it was very emotional,” explains Wolff about the minutes after the race. “If you drive your first race in a Mercedes, and you should actually win it and drive a monumental race, then you can’t say much. But it won’t be your last chance to win a race,” the team boss is convinced. This was the beginning of a fairy tale, a “new star” was born, according to Wolff.

How the pit stop drama came about:

– Shovlin: Pit crew made no mistake

Season off for Schmidhofer | Nachrichten.at

WHO warns: Millions of deaths from sedentary lifestyle – health

France: Ex-doctor sentenced to 15 years in prison for child abuse