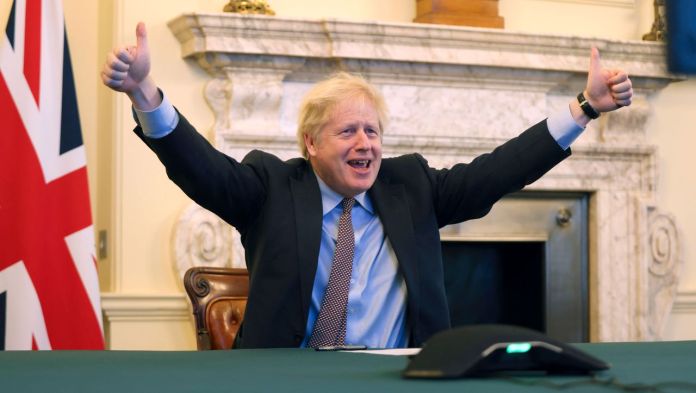 British Prime Minister Boris Johnson had a “small present” ready for everyone who “is still looking for something to read in a drowsy moment after the big Christmas dinner”: He recommends reading the “good news from Brussels” – and by that he meant on Brexit follow-up agreement negotiated on Thursday evening.
The resignation contract, which has been in force since January 31, was “just the starter,” the Prime Minister said in his video address. The current agreement is “the feast”. This is, by the way, “full of fish”. So he informed the nation of the agreement in the tough negotiations on fishing rights in the British North Sea.
Johnson’s negotiating partner, EU Commission chief Ursula von der Leyen, remained more sober and spoke of a “fair and balanced” negotiation result and a “requirement of common sense for both sides”. Chancellor Angela Merkel (CDU) welcomed the agreement as “the basis for a new chapter in our relations”.
What is in the long-awaited agreement between Brussels and London – and who had to give in where? The overview:

For European fishermen, lower fishing quotas will apply in the future. A transition period of five and a half years is intended to simplify the adjustment to the cuts; A 25 percent reduction in catches was agreed within this period. From June 2026, the European Union will then negotiate annual catch quotas with Great Britain.

The question of how much access EU fishermen should keep to British waters was one of the contentious negotiating points until recently. While Britain wanted complete control of its fishing grounds, coastal states like France, Belgium and Denmark in particular insisted on maintaining access as before. At around 650 million euros, the industry’s economic output is of rather minor importance.

In Great Britain the fishery generates only about 0.1 percent of the gross domestic product. For Brexit advocates, however, it had become a symbol of the sovereignty sought after Brexit – the prime minister, not least, had repeatedly sought the image of an »independent coastal nation«. This is countered by the fact that British fish producers export a large part of their products to the EU – and are therefore dependent on tariff advantages in return for EU catch quotas.
French fishermen had announced protests and blockade actions on the English Channel should the fishing quotas – as now decided – be reduced.

The protection of the European internal market was the most important concern for Brussels during the years of negotiations. The main concern was that Great Britain should adhere to the labor, social and environmental standards applicable in the EU – and receive unhindered access to the market in return. In addition, Great Britain should be prevented from unfairly favoring its companies through excessive state aid.

The EU has now been able to assert itself on this point: In the agreement, both sides commit to common subsidy rules. Premier Johnson had previously vehemently rejected this and tried to override rules that had already been made.

European companies that still feel disadvantaged by British subsidies in the future can also sue in local courts. Brussels can impose punitive tariffs if the British fail to abide by the rules and European companies come under price pressure as a result.

London also guarantees not to lower the existing social and environmental standards. The government had so far resisted this concession. However, if one of the two economic areas raises its standards, the other side doesn’t have to follow suit. The EU had previously requested this – and had to back off according to the previous information.

Implementation of the rules

Another point of contention was how the agreements reached should be enforced. Great Britain had strictly rejected any arbitration of future disputes by the EU Court of Justice. However, the EU had demanded clarity about future legal mechanisms and, in particular, jurisdiction by the European Court of Justice (ECJ).

A representative of the British government stressed on Thursday evening that there would be no prominent role for the European Court of Justice. During the negotiations, the British government had repeatedly insisted that the United Kingdom should no longer be subject to its jurisdiction – and declared this as the ultimate emancipation from European rules. The EU, however, had continued to demand an overriding role for the European Court of Justice – and now apparently had to give up this position. Instead, according to the information so far, other arbitration mechanisms should take effect.

While the explanations on the trade in goods are detailed, the rules for services only appear briefly in the agreement that has now been reached. This is particularly devastating for the UK, whose economy is more than 80 percent dependent on services – more than the rest of Europe. Great Britain depends on smooth processes in this area, primarily due to its financial location in London.

However, a number of issues remain open in this area and should be resolved in the coming months. For the British economy in particular, Brexit is far from history.

The parliaments of both sides still have to confirm the agreement reached. In Great Britain, the members of the lower house must interrupt their Christmas vacation on December 30th. The approval of the opposition Labor Party is seen as unproblematic. On the other hand, there is uproar in Johnson’s own party – for many Brexit supporters the compromise does not go far enough in terms of British “independence” from the EU.

On the EU side, the governments of all 27 member states have to approve the outcome of the negotiations. Since there is not enough time for regular ratification by the end of the year, the agreement should then be further examined and approved. It should come into force provisionally on January 1st. Then Great Britain will leave the EU internal market and the customs union after the Brexit transition period that has been in effect until then.

ARD film about a journey into my own past

Germany is really in that bad position 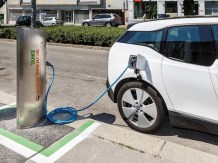