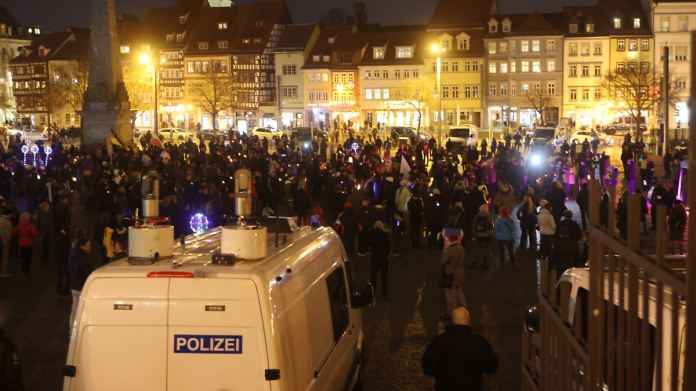 Call for the protection of the constitution
“Lateral thinkers” soon under observation?

The supporters of the “lateral thinking” movement are associated with Reich citizens and right-wing extremists. Experts warn against not taking the group seriously enough. She has not yet been observed by the Office for the Protection of the Constitution. That could soon change in Thuringia.
In view of the ongoing protests by the “lateral thinking” movement and increasing violence in the vicinity of the demonstrations, calls for the protection of the constitution are getting louder. In Baden-Württemberg and other federal states, however, it is not enough to be classified as an observation object, despite warnings of radicalization and infiltration by extremists.

The State Office for the Protection of the Constitution in Baden-Württemberg announced that “lateral thinking 711” is currently not an object of observation. However, well-known extremists are active both among the organizers of the “lateral thinking” events and in the immediate vicinity of the initiative.

The President of the Thuringian Office for the Protection of the Constitution, Stephan J. Kramer, expects that the movement will soon be classified as a suspected case. The background is a meeting of the organizers of the “lateral thinking” demonstrations against the corona measures with members of the Reich citizen scene in Saalfeld, Thuringia, Kramer told the German press agency. Around 100 people from all over Germany took part. Only a few left after they became aware of the composition of the participants. Kramer had told the RBB that from his point of view there were now “sufficient indications” to classify the scene as a suspected case.

Uli Sckerl, member of the state parliament of the Baden-Württemberg Greens, expects a decision on a so-called test case in the south-west in the coming weeks. That would then initially be the preliminary stage of a suspected case in which the protection of the constitution can also use intelligence services. “There is enough material to make a joint and nationwide decision in the foreseeable future,” said Sckerl, who also heads the parliamentary control committee for the secret service in Baden-Württemberg.

Around a week ago, State Interior Minister Thomas Strobl warned in the State Parliament’s Interior Committee against the increasing influence of extremists and constitutional enemies in the ranks of the “lateral thinkers”. The movement feeds on citizens of the Reich, self-administrators, right-wing extremists and conspiracy theorists who instrumentalized the demonstrators.

The anti-Semitism commissioner of the Baden-Württemberg state government, Michael Blume, openly accuses the “lateral thinkers” of being hostile to democracy. “It attacks democracy,” said Blume in the ZDF “Morgenmagazin” magazine. “If you don’t want to see how dangerous this movement is and how it is radicalizing, you obviously don’t want to see it.” Blume justified his assessment, among other things, with the fact that “lateral thinking” founder Michael Ballweg had called a “constituent assembly”, and that there were also contacts with the so-called Reichsbürger scene. These reject the German state, its legal system, governments, parliaments and the police.

The Stuttgart entrepreneur Ballweg defended himself against the allegations. “The movement is misrepresented,” he said. “We are a peaceful movement and not a political party.” Extremism, violence, anti-Semitism and inhuman ideas have just as little place in the “lateral thinkers” as the symbols of these ways of thinking.

Supporters of the initiative “lateral thinking 711” and offshoots of the movement have taken to the streets in numerous German cities against restrictions in the corona crisis in recent months. There were also counter-demonstrations.

Magna Steyr: “The future of the car is electric”

Detection in wastewater samples – the virus mutation was in Switzerland...