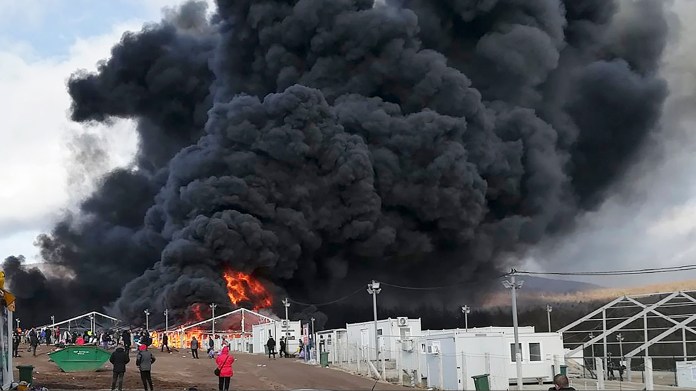 One day before Christmas, the International Organization for Migration closed the criticized Lipa refugee camp in Bosnia. 1300 people are now homeless. Some apparently set their tents on fire out of frustration.

The International Organization for Migration (IOM) closed the Lipa reception center near the Bosnian city of Bihac one day before Christmas. Around 1,300 refugees would now be on the street, said Natasa Omerovic, the camp’s coordinator, the news portal “klix.ba”. The IOM had previously threatened to leave the camp to its own devices if it is not made winter-proof: it can only be reached via dirt roads and is not connected to the water or electricity grid. However, the Bosnian authorities are responsible for this. Now the IOM decided to finally vacate the camp.

Shortly before the evacuation, some residents set tents and containers on fire. A thick cloud of black smoke was visible from afar. At the time, the warehouse was almost empty, said Peter Van der Auweraert, the IOM representative in Bosnia, on Twitter. Nobody was injured. But almost the entire infrastructure in the camp was destroyed or damaged, it was a “terrible day”. Fire departments were able to put out the fire. The police are now investigating the arsonists.

What will now happen to the residents of the camp is unclear. Some of them are likely to try to get to Croatia and thus to the EU. Others will stay for better or for worse: in forests, on fields or in empty buildings. Most of the single men will not find a place in the official camps because they are already overcrowded. In total, depending on the estimate, more than 1500 people in northwestern Bosnia could be homeless in the middle of winter.

The Lipa camp is located in an inhospitable area 25 kilometers southeast of Bihac. It was built in September after the Bosnian authorities ordered the closure of the Bira camp on the outskirts of Bihac. As a result of this measure, the refugees and migrants should disappear from the cityscape of the 60,000-inhabitant city in northwest Bosnia.

The authorities never kept their promise to connect Lipa to electricity and water. Refugee workers criticized the inhumane conditions in the camp. The Austrian organization SOS Balkanroute described it as the “Moria on our doorstep”, alluding to the refugee camp on the Greek island of Lesbos, which burned down in September. The EU also made clear criticism: “The situation of migrants in Bosnia and Herzegovina is alarming,” criticized the EU Commissioners for Foreign Affairs, Migration and Enlargement on Monday.

Because of their close proximity to the EU country Croatia, Bihac and the canton Una-Sana are very attractive to refugees and migrants. An offshoot of the so-called Balkan route runs through Bosnia, via which refugees and migrants from Turkey try to get to Western Europe.

TV doctor Dr. Wimmer speaks at “A Heart for Children”...

Shock news from Argentina: State mourning after the death of Diego...