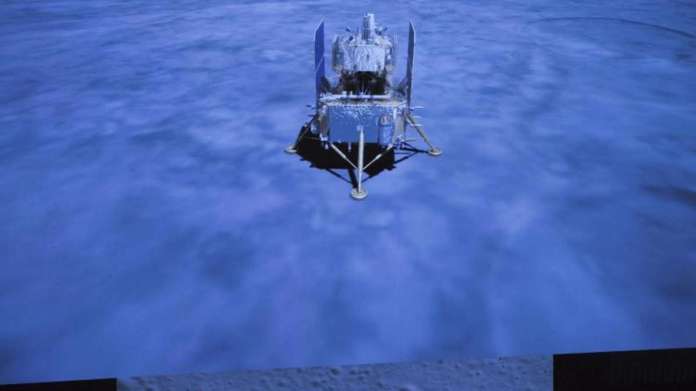 For the first time in four decades, China has brought moon rocks back to earth. The flight also served as preparation to take Chinese astronauts to the moon. Is China catching up faster and faster?

Beijing (AP) – As the third space travel nation after the USA and the Soviet Union, China brought moon rocks to earth for the first time.

After the unmanned lunar mission, the capsule of the spaceship “Chang’e 5” landed “successfully” in the north Chinese steppe in the early hours of Thursday night (local time, Wednesday CET), as reported by state television. It is the first time in 44 years that moon rocks have been brought back to earth.

Rescue teams with helicopters and vehicles equipped with powerful searchlights found the capsule that had landed on a parachute in the Siziwang Banner in Inner Mongolia. Live images showed the capsule in the snow. “It is in good shape,” commented an expert on state television. The recovery was made difficult by darkness and harsh winter weather with snow, wind and temperatures of more than minus 20 degrees.

Nevertheless, the search teams found the capsule only about half an hour after the first news of the landing and thus faster than expected. The capsule was examined for its condition, but not opened at the landing site. Rather, it should be removed completely in order to then unload the lunar rocks in a controlled manner and avoid contamination.

The capsule is only one seventh the size of China’s manned spacecraft. At the same time, the landing area was 16 times larger than usual because the capsule had used the “hopping re-entry” method into the earth’s atmosphere to avoid excessive heat and damage. The long trajectory is reminiscent of a bouncing stone thrown at a shallow angle over a surface of water. This makes the landing point difficult to predict. At 21,000 square kilometers, the landing zone was as large as the German state of Hesse.

The moon mission was “one of the most difficult in China’s space history,” as it was officially called. “Chang’e 5” consisted of a lander and an ascent module as well as an orbiter and the capsule for the return. As the first space travel nation, China was able to perform a robot-controlled docking maneuver without astronauts in the orbit of the earth’s satellite, when the ascent module reconnected to the orbiter after the moon landing and loaded the lunar rocks. The flight was also an important preparation for a manned moon landing, which China plans by the end of the decade.

Researchers are eagerly awaiting the moon rock, which is much younger than any previously collected samples from the USA and the Soviet Union. The investigation could provide new insights into volcanic activity and the history of the moon. The US Apollo missions brought back around 380 kilograms of lunar rock. The Soviet Union collected around 300 grams with unmanned missions.

The lander of “Chang’e 5” touched down in a volcanic area named after the German astronomer Karl Rümker (1788-1862), which lies in the “ocean of storms”. This region in the upper left part of the Earth-facing side of the moon is only 1.2 billion years old. In contrast, the ages of the lunar rocks collected by the United States and the Soviet Union in the 1960s and 1970s are estimated to be 3.1 and 4.4 billion years ago.

With the successful return of “Chang-e 5”, China has cleared an important hurdle and has continued to catch up with the major space travel nations. “China is still lagging behind Europe and the USA overall, but is making very fast progress,” said the Australian space expert Morris Jones of the German press agency. “Soon it will have its own space station.”

China is pursuing an ambitious space program with missions to the moon and Mars and the construction of its own space station in the coming years. Two projects are currently ongoing: In January 2019, China was the first space nation to land with “Chang’e 4” on the relatively unexplored far side of the moon. A rover was launched and continues to explore the surface today.

The unmanned Mars probe “Tianwen-1” (Questions to Heaven) is also on its way to the “Red Planet”. As of this week, the spaceship is more than 100 million kilometers from Earth. It is scheduled to arrive on Mars in February in order to attempt the landing in the following weeks, which is, however, much more risky than a moon landing. Of 18 attempts to land on Mars so far, only 10 have been successful – nine by the USA alone.

China’s moon flight took place 51 years after the USA’s first manned moon landing on July 21, 1969, when Neil Armstrong and Edwin “Buzz” Aldrin were the first people to step on the surface of the Earth’s satellite. The US has put astronauts on the moon six times. With “Apollo 17” in December 1972, the United States stopped its manned moon landings.

Scientists are also waiting for plant seeds that “Chang’e 5” took into space. These include rice, orchids, alfalfa and oats, as the Xinhua news agency reported. The idea is to expose the seeds to weightlessness and cosmic rays, which may trigger mutations that promise higher yields or better quality. According to scientists, however, such changes are impossible to predict and only become apparent after returning to earth and further cultivations.

CCTV video on preparations for landing

Houses in the surrounding area in demand: property prices are rising...

Hotel on the market: operators rely on mulled wine mobile due... The Salzkammergut also cycles in winter