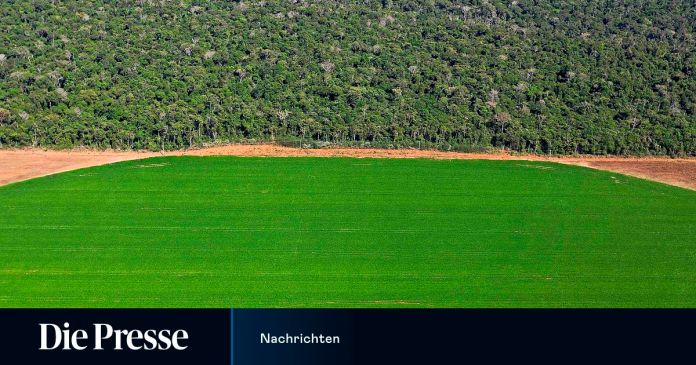 The destruction of the rainforest in the Amazon is proceeding rapidly – the Bolsonaros government approves it.

A disaster announced. For months it had become apparent that deforestation in the Amazon region would continue to increase in the year of the pandemic. Now the Brazilian space agency INPE, which has been documenting the deforestation of the tropical forest with its satellites for many years, has announced that between August 2019 and July 2020, as much has been cleared as it has not been for twelve years.

The world’s largest tropical forest lost 11,088 square kilometers of trees in the period, an increase of 9.5 percent over the previous year. That corresponds to an area almost as large as Upper Austria. And it illustrates the dramatic consequences of President Jair Bolsonaro’s policies. Since taking office at the beginning of 2019, he and his Environment Minister Ricardo Salles had systematically weakened the environmental control authorities, either tolerated illegal land occupation and wild deforestation, or in some cases even publicly defended them, and repeatedly called for protected areas to be opened up to the indigenous population for use by agriculture and the mining industry.

The deforestation rate that has now been reported is more than three times the target that Brazil presented for 2020 at the 2009 climate conference in Copenhagen. In fact, deforestation should have dropped to less than 3,000 square kilometers. The Amazon rainforest is of central importance for climate protection – it is considered the “green lung” of the earth. The trees can absorb and store CO2. However, when they burn down or are cut down, the greenhouse gas is released back into the atmosphere.

The balance sheet was not presented by Environment Minister Ricardo Salles. In a cabinet meeting recorded by the federal police at the end of April, the former lawyer called for international attention to the coronavirus to be exploited to “change rules” and “simplify standards” in the Amazon region.

The INPE balance sheet, which is preliminary and should not be confirmed until next year, was presented by Brazilian Vice President Hamilton Mourao. The ex-general has tried on many occasions to smooth the waves that President Bolsonaro is stirring up. Since May, Mourao has headed the “National Council of the Amazon”, which is also supposed to curb the excesses in the tropical forest.

With the military against wood theft

Last May, the government sent 3,400 soldiers into the rainforest to stop the theft of precious wood and illegal logging. Mourao now admitted that there was no reason to “celebrate anything”, but he read from the data at least a slight tendency towards improvement. Allegedly, the increase in offenses was curbed by the protection force.

Environmental groups could not read anything positive from the numbers. “They show that Jair Bolsonaro’s plan was successful,” etched the Climate Observatory, a coalition of 56 environmental organizations, including Greenpeace and the WWF. “Squatters, miners, illegal loggers and Indian killers knew how to interpret the signals that were being sent out by the presidency and, in an unprecedented way, by the Ministry of the Environment.

Fifa threatens clubs if a super league is founded

After storming the Capitol: Trump is not aware of any guilt

Woman suffering from dementia freezes to death in front of a...