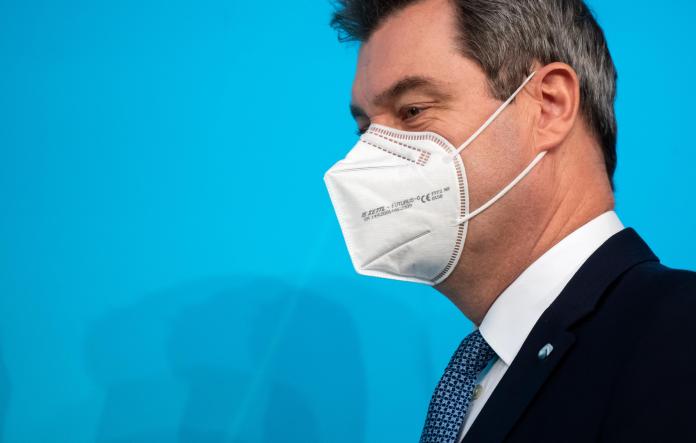 The last deliberations of the Bavarian cabinet this year are under special circumstances: State Chancellor Florian Herrmann, who has been coordinating Corona policy in the State Chancellery for months, is in quarantine after a positive Corona test, as is Prime Minister Markus Söder (both CSU) as his contact person.

Instead of discussing the fight against the pandemic in a video slot, the resolutions should be short and sweet in the circulation procedure. And instead of the planned press conference with Söder, Herrmann and Economics Minister Hubert Aiwanger (Free Voters), there is only a written message afterwards.

Söder: Holidays are a real test

In addition to the corona vaccinations, which are supposed to start after Christmas, it will also be about dealing with travelers returning home. On Monday, when visiting a vaccination center at the Munich exhibition center, Söder emphasized once again that the Christmas holidays were causing him great concern. The corona situation is still serious and worrying. “We are facing a real test, these are the holidays and vacations,” he emphasized. Söder had pointed out several times in the past few weeks that both the summer and carnival holidays had led to the spread of Corona.

In view of the current situation, Bavaria is sticking to its consistent line of prudence and caution, stressed Söder in his last public appearance before his quarantine on Monday. And the cabinet will therefore deal with how to deal with the “many vacationers and travelers returning”. On the one hand, it is about people who fly to one of the traditional travel destinations on vacation. On the other hand, it is also about the people who travel from Bavaria to their original homeland.

Söder did not say which regulations he has in mind. So far: Anyone who enters Bavaria from a risk area abroad has to be in quarantine for ten days. This can be ended prematurely after five days at the earliest with a negative corona test. Last week, Söder announced a tightening specifically for non-EU citizens in his government statement: You would have to present a current negative corona test when entering the country in the future – otherwise entry would not be possible. Violations of entry and quarantine regulations can result in a high fine.

Another topic: The new fertilizer ordinance

Beyond Corona, the cabinet should deal with the new fertilizer ordinance. The background is the high nitrate pollution of the groundwater in many places in Bavaria. Among other things, nitrate is suspected of causing cancer. The causes of high nitrate levels are undisputed: fertilizers and slurry. Now stricter regulations are to ensure that less fertilization is used in particularly nitrate-polluted areas.

These polluted areas were marked in red on a map. Around a quarter of the area of ​​Bavaria used to be red. Now, according to a new measuring method, the so-called “AVDüV”, this area has been halved – much to the annoyance of environmentalists, the local council and water management. Because from their point of view, the water quality has not improved. The farmers, in turn, are happy that they can continue to fertilize on many areas.

The President of the Community Assembly, Uwe Brandl, wants to ask the EU Commission to review the new AVDüV. After all, for Brandl, groundwater is the most important raw material that needs to be protected. And Detlef Fischer, managing director of the Association of Bavarian Energy and Water Management, criticizes the fact that this creates the impression that the situation is far less explosive than before. Despite many concerns, the Council of Ministers is likely to adopt the new implementing regulation.

Corona test sites in Berlin are not enough

ECB is preparing for new aid