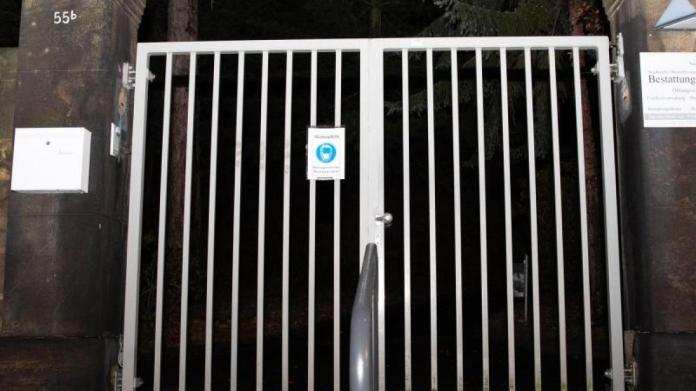 Crematorium in Zittau overcrowded – corpses have to be relocated

In Zittau, East Saxony, the number of deaths in December more than doubled compared to last year. According to the city, the bodies now have to be temporarily stored outside the crematorium.

IIn the corona hotspot Saxony, the situation is getting worse. Because of the dramatically high death toll in Zittau in East Saxony, corpses have to be temporarily stored there outside the crematorium. The city of Zittau announced on Tuesday evening that the dead are to be stored “in the area of ​​the flood base” and driven to the crematorium “when released for cremation”. The management of the crematorium reached an agreement with Lord Mayor Thomas Zenker at short notice. At the flood base there is a large hall in which materials are stored that would be needed in the event of a flood.

The number of necessary cremations is currently “sometimes exceeding the capacity of the Zittau crematorium,” it said. There are significantly higher numbers of deaths, more admissions interviews, funeral examinations and notarizations in the registry offices. All those involved are at the “load limits”. The city requested help from the district of Görlitz and the state government of Saxony in the event that the situation deteriorated further.

The registry office of the city of Zittau will work due to the urgent need on December 24th and 26th from 9 a.m. to 12 p.m. and will only notify deaths, it said. Mayor Thomas Zenker explained: “The colleagues in our registry office have meanwhile taken on extra shifts in order to properly document the deaths. Organizationally, we have reached our performance limits and ask for understanding from all those affected. “

Soldiers of the Bundeswehr are now to help out in Zittau at the turn of the year. According to the city, additional bed capacities in hospitals and rehabilitation facilities have been organized.

Saxony has been the Corona hostspot in Germany by a large margin for weeks. For six of the ten districts in the Free State, the Robert Koch Institute reported an incidence value of more than 500 on Tuesday. The value indicates how many people per 100,000 inhabitants were infected with the virus within seven days. On Tuesday, the districts of Bautzen (637.5) and Zwickau (620) were at the top, followed by the district of Görlitz (582.1), in which Zittau is located. Nationwide, the RKI reported an incidence of 198 for Tuesday.

The city with around 25,000 inhabitants is located in the extreme south-east of Saxony in the triangle of Germany, Poland and the Czech Republic. A week ago a doctor from the city caused a sensation with statements about a so-called triage. The term means that health professionals must decide who to help first due to scarce resources.

Prime Minister Michael Kretschmer (CDU) warned on Tuesday: “There will be a third wave.” The problem is that this wave could pile up at the current level. “The ten toughest weeks of the pandemic lie ahead of us,” said the head of government. The third wave could be visible between January 10th and 15th.

Alpine skiing in the ticker: The team event in Lenzerheide

Warzone: 6-year-old CoD professional is banned in the stream – then...

EMA continues to recommend the use of Astra Zeneca

Series adaptation from February on Amazon