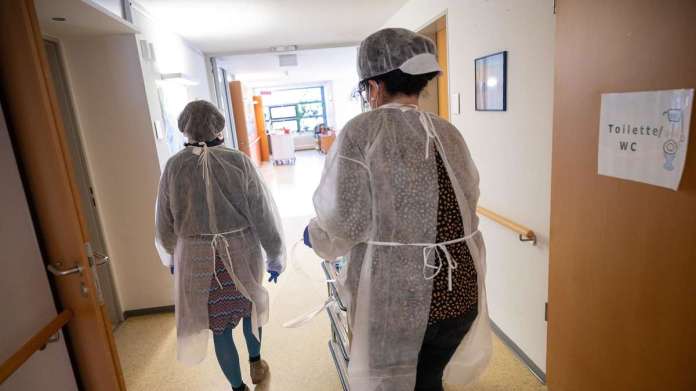 The wave of corona infection in old people’s homes and among senior citizens is unchecked – despite the partial lockdown that has lasted for weeks. This is the conclusion of a research group at LMU in a report.

The newest Infection numbers give an idea of ​​why almost all politicians rely so heavily on one fast hard lockdown have urged: Almost 28,000 more sick people and 1,000 dead within just 24 hours reported the federal Robert Koch Institute (RKI) yesterday morning – Corona hits Germany harder than ever. And the development could worsen even more dramatically in the next few days.

The background: especially in the Retirement and nursing homes and the wave of infection is rolling among seniors unbraked continue – despite weeks Partial lockdown. That emerges from the explosive report of a Munich research group from the Ludwig Maximilians University (LMU). A chain reaction threatens: the newly infected senior citizens could the Death toll let it rise rapidly. Because they are considered the number one risk group for Covid-19, the multi-organ disease caused by the Sars-Cov2 virus. In Bavaria, over 3200 of the 5156 corona deaths belonged to the 80 plus generation.

The seven-day incidence in older seniors climbs to 394 in Bavaria, and even to 787 in terms of things

In this age group is the Seven-day incidence – the number of new infections per 100,000 inhabitants – according to the findings of the LMU scientists, almost twice as high as in the general population. In Bavaria it was last at 394 for people over 80, in Saxony it was even 787.

“The previous corona measures fail to protect the elders“, Says the report of the Corona Data Analysis Group (CoDAG), a group of experienced statisticians. Your key message: The number of new corona cases rose sharply in all age groups by the beginning of November. After that, the curve flattened a bit – except for those over 85. “Here the increase in the number of infected people is unbroken and continues to rise, especially steep for those over 90“, Reports Professor Dr. Göran Kauermann. The exact numbers and other findings can be found on the website of the research group.

The co-speaker of the Munich research group, Professor Dr. Helmut Küchenhoff, called on the politicians to do so, Retirement and nursing homes with protection and test strategies more support: “Against the background of these dramatic figures, it cannot be that there is a lack of test capacities in the homes, for example.”

It would be nice if top politicians like Ms. Merkel talk more about the big problems we have in many old people’s homes.

Coronavirus: Criticism also from the virologists Kekulé and Streeck

In addition, the situation in these facilities is still far too little in the focus of public discussion, said Küchenhoff. “It would be desirablewhen top politicians like Ms. Merkel talk more about the big problems we have in many old people’s homes. ”The leading virology professors made similar statements in interviews with our newspaper Alexander Kekulé and Hendrick Streeck.

So our politicians have that Shelter of homes overslept? “So far there has been no sign of a slowdown in the infection rate for this population group,” report the LMU researchers. Their conclusion: “It clearly shows that the measures taken to contain infection are not sufficiently effective for the highly vulnerable population group.” Or to put it another way: The previous protective measures for retirement homes – if they existed at all in practice – are obviously ineffective ran.

That is why more and more doctors are demanding that the infection process in the Homes is under closer scrutiny. However, neither scientific data nor the details of Deaths clarified with home residents, criticized the 1000-member medical network EbM. “There is no specific documentation from elderly care.”

Too many corona cases! Berlin school closes – until after...

Model Kasia Lenhardt died at the age of 25

Apple and Prepear are aiming for an agreement on the pear... According to initial projections, Swiss voted in favor of a ban...

Mayoral elections on Fehmarn and Sylt as well as in Preetz...

Berlin & Brandenburg: Up to twelve degrees on Thursday in Berlin...