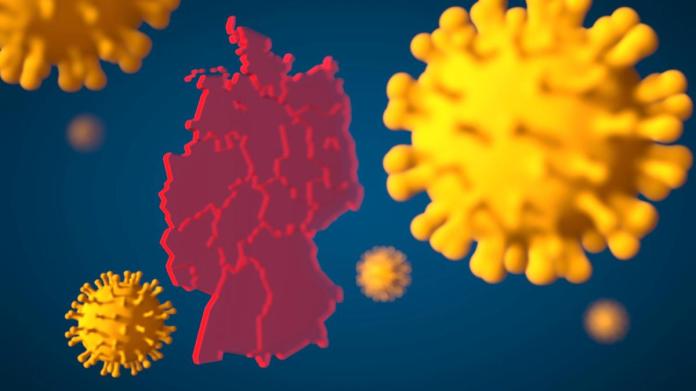 590 people died of the corona virus in Germany within 24 hours. This is reported by the Robert Koch Institute. In addition, 20,815 new cases of corona infection were recorded. An overview in graphics and numbers.

Dhe number of coronavirus-related deaths reported within 24 hours has skyrocketed and has reached a new high. The German health authorities reported to the Robert Koch Institute (RKI) 590 new deaths within a day, according to the RKI figures from Wednesday morning.

That is over 100 cases more than the previous record of 487 deaths last Wednesday. A total of 24 hours 20.815 new infections with the coronavirus reported. On Wednesday in the previous week the value was 17,270. The highest daily value so far was on November 20 with 23,648 cases.

The number of daily deaths had tended to increase recently, which was expected after the steep increase in new infections. The total number of people who died with or with a proven Sars-CoV-2 infection rose to 19,932 on Wednesday.

For the whole of Germany, the RKI also gave a new high of 149,1 New infections per 100,000 inhabitants in seven days. At the beginning of the partial lockdown in November there were around 120. The federal and state governments want to achieve that there are fewer than 50 – so health authorities could track infection chains again.

In the Lower Bavarian district Regen the corona warning value rose to 578.7 new infections per 100,000 inhabitants within seven days. In addition, two districts in Saxony turned pink on the RKI dashboard on Tuesday – this means that their incidence is now over 500 new infections. The county Saxon Switzerland-Eastern Ore Mountains, which has been one of the most severely affected regions in Germany for weeks, reported 508.2 new infections per 100,000 inhabitants in the last week, the district Bautzen 500,7.

France reported a significant increase in new infections on Tuesday. The Ministry of Health counted 13.713 new corona cases compared to 8083 last week. There were 831 more deaths reported. After the weekend, the numbers were significantly lower with 3,411 new cases and 366 deaths.

For Monday, however, the health director reported around 3,400 new infections within one day, the lowest value since August. At the beginning of the week, however, this number is always lower because there is less testing on the weekend. France has been hit hard by the corona pandemic – more than 55,000 people have died so far.

Denmark announced on Monday that the contact restrictions would be tightened in view of the increasing number of infections. In 38 municipalities, including Copenhagen, bars, restaurants, museums and cinemas will have to close from Wednesday, Prime Minister Mette Frederiksen announced. Higher grades and college students are taught online. The restrictions are in effect until January 3rd. It was also announced on Monday that Prince Christian (15) had tested positive for the corona virus at his school after a local corona outbreak. The eldest son of Crown Prince Frederik (52) and Crown Princess Mary (48), who attended a public school near Copenhagen, is number two in the Danish line of succession after his father.

According to the EU disease authority ECDC, the most affected are currently in Europe Luxembourg, Croatia and Lithuania, where over 1000 people per 100,000 inhabitants were newly infected with the coronavirus in the past 14 days.

Such is the situation in the USA: The US disease centers CDC reported on Monday 174.387 registered new infections and 1118 further deaths. This means that there are more than 14.6 million corona infections and over 281,000 deaths in connection with Covid-19 in the USA.

In Russia were on Monday 28.142 new proven cases of infection reported, including 7,279 in Moscow. A new high in new infections was reported on Sunday. In total, more than 2.48 million cases of infection have been registered so far. The number of deaths related to the virus rose by 456 to 43,597.

How CD Projekt Red tries to save the share price

Thomas Tuchel believes in the future

Bottas has “no chance” against Hamilton

Australian Open: three zones – the fans have to decide tennisnet.com IOC must create clarity on the Olympics