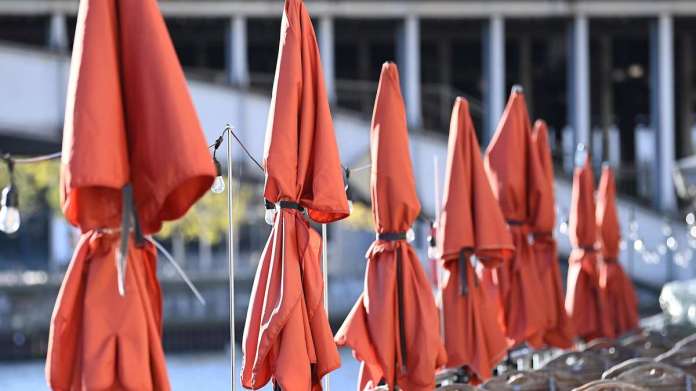 The corona virus still has Germany under control. Now it became known how long the restaurants and hotels should remain closed.

Update from Wednesday, December 2nd, 2020, 3:50 p.m .: The federal and state governments are apparently planning to close the Gastronomy and the Hotels should last until January 10, 2021. This is what the Prime Minister and Chancellor Angela Merkel are planning, according to a report by the news agency “Reuters”.

So far, the “Partial lockdown” only until December 20, 2020. The federal and state governments have not yet commented on the report.

Before the report became known, the German Association of Towns and Municipalities the Federal government a reopening of the Gastronomy in January 2021 with a Curfew suggested in the evening. General manager Gerd Landsberg told the “Rheinische Post”: “We will find it difficult to maintain the closure of restaurants and hotels beyond the end of the year for economic reasons alone. That will simply be too expensive for the state. “

+++ 3:35 pm: Federal Minister of Health Jens Spahn expects that at the turn of the year with first Corona vaccinations can be started. The first priority was the elderly, people with previous illnesses, employees in care and in hospitals and people who maintain public order, said Spahn on Tuesday in Düsseldorf after a meeting of the North Rhine-Westphalian cabinet that Spahn had attended.

Vaccinations are “an offer,” said Spahn, nobody has to be vaccinated. Nationwide would probably be between at the beginning five and eight million vaccine doses to disposal.

Health protection will be used in the fight against pandemic not set absolutely. But he has a heavy weight, said Spahn. After all, there are around 400 deaths every day. “You won’t see Christmas at all,” said Spahn. Their families are in mourning on the holidays. “The good news: this time is finite for the foreseeable future.” The vaccines would give reason for this hope.

Corona in Germany: Biontech and Pfizer apply for EU approval for corona vaccine

Update from December 1st, 2020, 11 a.m .: The Mainz company Biontech and the US pharmaceutical giant Pfizer have the approval for theirs from the European Medicines Agency (Ema) Corona vaccine applied for in the EU. The application for a conditional marketing authorization was submitted on Monday, announced Biontech and Pfizer on Tuesday. On Monday, the US company Moderna also submitted a corresponding application for its vaccine to Ema.

Corona in Germany: traffic light for intensive care beds in Berlin back to yellow

+++ 6:13 p.m .: The Berliners Corona-Ampel For Intensivbetten shows yellow again. According to the values ​​updated on Sunday, 24.2 percent of the intensive care beds are now with them Covid-19 patients occupied. The traffic light jumped to the highest warning level for the first time at noon with a value of 25.3 percent delivered for Saturday. For the incidence value of the last seven days, the traffic light system has been showing red for a long time: the value is currently 202.0.

+++ 3.39 p.m .: The situation in Berlin is coming to a head. Both the seven-day incidence in Berlin at 200.9 New infections per 100,000 inhabitants and the occupancy of the intensive care beds in the state capital’s hospitals (currently 25.3 percent) can be interpreted as clear alarm signals. Since the introduction of the so-called Corona-Ampel This means that for the first time in Berlin, two of the three “traffic lights” are on red. Within one day there were 824 new infections and eleven deaths.

The Berlin Senator for Health, Dilek Kalayci, is afraid of overloading the Berliner Hospitals and appeals to the population of the capital: “It is the order of the day to forego any contact that is not absolutely necessary.” Kalayci also demands the Berlin women and Berliner to this, “preferably everywhere” the mask to wear. In the past few weeks, Berlin has hosted large-scale demonstrations against the Corona rules, Most of the participants neither wore a mask, nor was it Minimum distance adhered to.

Again for understanding. I go along with the fact that the injured are of no consequence on a normal New Year’s Eve. But for the current pandemic situation. See the second red Corona traffic light in Berlin. More than 25% ITS occupancy by Covid patients.
Only 12% free ITS beds. pic.twitter.com/uJJVMUTFn3

Update from Sunday, November 29th, 2020, 8:15 a.m .: According to a survey by the Barmer health insurance company, just over half of the population is in favor of a vaccination against this Coronavirus ready. While 53 percent of those surveyed over the age of 16 are planning to be vaccinated against the virus, only 42 percent want their children to be vaccinated, reported the “RedaktionsNetzwerk Deutschland”, citing the survey. According to the information, a total of 2,000 people were interviewed in a representative manner.

15 percent said they might oppose it Corona get vaccinated, nine percent “probably not” and 13 percent “definitely not”. Ten percent of those questioned were undecided. According to scientific knowledge, around two thirds of the population must be vaccinated in order to achieve what is known as herd immunity.

Corona in Germany: admission freeze in one of the largest hospitals

+++ 4.20 p.m .: One of the largest hospitals in Germany, the Vivantes Hospital in Berlin-Neukölln, has due to the many Corona-Patient: within one Stop recording imposed. This is reported by the Berlin “Tagesspiegel” with reference to hospital circles. Fire and rescue services should also no longer be allowed to deliver emergencies.

According to the “Tagesspiegel”, 85 percent of the beds in the hospital are occupied. The big problem is a lack of nurses due to the Corona-Pandemie. “Around 15 percent of the nurses are absent from most wards – because they are sick themselves or are in quarantine,” said Vivantes doctor Thomas Werner.

Police operation at the Corona test station in Hildburghausen

+++ 2:05 p.m .: after the police on Thursday evening via the assembly authority knowledge of a call on social media for a Blockade the local Corona-Teststation in Hildburghausen obtained, this moved out to a mission. A Blockade could not be found on site. Who exactly is behind it is unclear.

+++ 12.20 p.m .: According to the register of the German Interdisciplinary Association for Intensive Care and Emergency Medicine (DIVI), all Intensivbetten in nationwide Corona-Hotspot Hildburghausen occupied. The DIVI register lists a total of eight for the district Intensivbetten on. in the Hildburghausen district there is a general hospital and a specialist clinic for psychiatry and neurology.

The Incidence number has increased from 602.9 to just under 630 compared to Thursday (November 26th, 2020). There are currently 853 active members in the county positive corona cases. As the only region Germany shines Hildburghausen on the Crown-Karte of Robert Koch Institute pink.

First report from Friday, November 27th, 2020: The Thuringian Hildburghausen currently applies to a Incidence number (Number of New infections per 100,000 inhabitants) of 602.9 is by far the largest Corona hotspot in the Federal Republic. After there were protests in Hildburghausen on Wednesday (25.11.2020) *, in which most of the participants did not Mouthguard wore or Keep your distance, the situation continues to escalate.

After the Hildburghausener District Administrator Thomas Müller on Thursday (28.11.2020) the Protests against the strict Lockdown criticized as irresponsible, he was in the social media offended and threatened. As reported by Spiegel Thomas Müller according to the police already reported in Erfurt. He is now under Police protection.

Can anyone imagine how angry I am? Video from today’s demonstration in hotspot hildburghausen
From such “concerned parents” I might have the children in emergency care tomorrow. Oh, how beautiful Not pic.twitter.com/BhzPP83D85

In the Corona hotspot Hildburghausen, there has been a drastic lockdown since the middle of the week

Both Demonstrations Hundreds of people moved through the southern Thuringian city on Wednesday. About 30 used police officers succeeded, with selective use of pepper spray the Demonstrators to disperse. 30 participants should report violations of the German Infection Protection Act received, there should have been no arrests.

In Hildburghausen apply drastically since the middle of the week Corona measures. According to Spiegel, citizens are no longer allowed to leave their homes without good reason until December 13th, kindergartens and schools are closed.

* fr.de is part of the nationwide Ippen digital editorial network.

Waiting for the doping verdict

WhatsApp: No more support – Messenger will soon no longer be...

Al-Attiyah fastest in the Dakar prologue: Sainz braked by a puncture