Germany has been in a tough corona lockdown since mid-December. Many ask themselves: Are the measures and rules already taking effect?

The country has been in the harten Lockdown. Most of the retail trade is closed. Hairdressers and cosmetic studios are tight. School lessons are severely restricted.

Lockdown in Germany: Are the corona measures already having an effect?

Many people in Germany are now asking themselves: What effect are the corona measures already having? Statisticians from the Ludwig Maximilians University (LMU) in Munich have updated the case numbers precisely. Your forecasts are sobering.

The preliminary result of Professors Göran Kauermann and Helmut Küchenhoff from LMÜ Munich reads: No statements can yet be made about the effectiveness of the December lockdown.

Corona numbers had already decreased before the “lockdown light”

In a previous survey, the scientists calculated that the Corona-Infection happens even before „Lockdown light“Had slowed down. In other words: the Corona-The numbers were down before the restaurants had to close.

The following statistic states that the Corona-New infections “increased by December 8th”. They do not yet want to judge the development after this point in time “due to the incubation period and reporting delay”.

One thing is certain, however: Many people who have dealt with in recent weeks Corona infected, the disease will not survive. The decided Corona-Measures would not change anything – even if they were effective now and the number of infections fell.

The scientists predict: Of all people who in calendar week 51 (between 14 and 20 December) as Corona cases reported, over 6,500 will not survive.

The number of deaths has risen steadily in the past few weeks (mid-November to early December). This is shown by the statisticians’ calculations. The reason for the constant increase: The massively increased case numbers in the group of over 80s who are particularly hard hit by the coronavirus.

Corona situation in Thuringia and Brandenburg is getting worse

In addition, the researchers predict how many people who have only recently been positive Corona were tested for the disorder not survive will. Since the “period between a positive test result and the fatal end of the disease” could be six weeks, the statisticians use the number of infections to predict that in Saxony “with approx 60 deaths per 100,000 population to be expected ”- comparatively very high values.

In other federal states, the number of deaths would not develop in this way, according to statisticians. There could be the measures taken are already having an effect. But that can only be said in the coming days. (Jan Wendt) * hna.de is part of the nationwide Ippen digital editorial network.

Joe Biden weeps for his deceased son during a farewell speech...

UniCredit is looking for a new boss – several candidates in...

Corona, current figures: Another 11,000 new infections! The curve is... 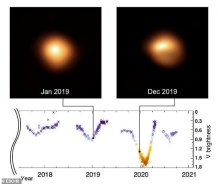 New analyzes show that Betelgeuse is shrinking and has entered the...

Kuehne + Nagel receives order for the logistics of the Moderna...