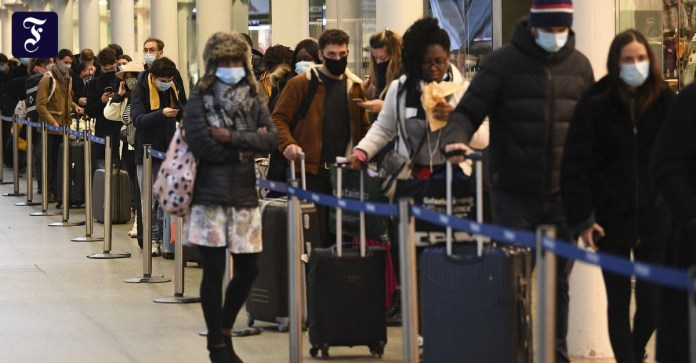 Wwhat else? What is still supposed to happen? After the chattering, panicky reactions to the virus mutant VUI-202012/01, the question must be asked that the world can find a healthy balance between the extremes. Hysteria doesn’t help anyone, but playing it down is even less effective. Least of all the most vulnerable. The danger did not only come into the world with the new variant. And the danger is not over because the governments react with flight bans and border closings.

According to all that is available in terms of epidemiological data, the mutant of the coronavirus, which was first noticed in southern England, has been circulating for months. It has only now been noticed because Great Britain – unlike most other countries including Germany – has established an effective network for the genetic recording of Sars-CoV-2 isolates from patient samples. If you don’t look, you won’t find anything, this lesson will make sense to everyone after the long debates about virus tests and case numbers. That would be a good approach for a “coordinated European” response. The information this research network has provided on the mutant so far is quite a bit – but still too little and uncertain overall. The scientists have communicated their previous findings to the British government, which has set up its own task force and informed the World Health Organization, that there is “moderate trust” in their own assessment.

These more than a dozen changes could be systemically relevant

But what does that mean: moderate trust? It is said that the findings so far are incomplete and that the data required for a final safety assessment are still missing. One thing is clear: such a mutant with many different mutations, of all things on the spike protein that is crucial for infection, is unusual – and should also be taken seriously. In other words, these more than a dozen changes could be systemically relevant. In some experiments these changes have already shown that the growth in the cell culture and thus the replication of the virus is increased. The mutant apparently multiplies faster in the artificial system of a laboratory and produces more virus particles. At the same time, the mutant also contains “weakening” traits that could impair the ability of the virus to bind to human cells.

The whole world is talking about the coronavirus. All news and analyzes about the spread and control of the pandemic in your e-mail inbox every day.

Whether they really do that or whether, on the other hand, the reinforcing properties are responsible for the fact that this variant has actually been displacing and spreading the other variants in southern England for a few weeks – none of this can yet be derived with certainty from the available data. The research work in the coming days and weeks will have to show that. There is also a lack of clarity with regard to the current situation: the observation that the virus is prevalent in an already strong infection process around London, on the one hand, consider the virologists to be questionable. On the other hand, the virus seems to have been around for months, and no one noticed a sudden change – not even the British Covid-19 genome researchers.

Two things seem clear: There is no evidence, not even molecular biological or clinical, that this variant is responsible for more severe disease courses. And it is very likely that the mutations will not affect the effectiveness of the vaccinations, even if the mutations are in sensitive areas of the virus blueprint. The human immune system is polyvalent – the vaccination only provides the impetus for the body to produce many different antibodies and immune cells that attack very different parts of the virus.

Assuming a dangerous “new” virus is therefore misleading. It is linguistically and with a view to novelty misleading, but it is also psychologically counterproductive: With the idea that the European focus must now be directed to the new variant in order to avert the greatest danger, the fight against the pandemic could even be one List. The fear tolerance of many people is now a scarce resource, and as long as the vaccines are not available in sufficient quantities, this also applies to the tools that are available to us to contain the viruses.

If you don’t want to risk exhaustion and mistrust further eroding this limited arsenal, you can only be interested in one thing: That the number of infections is reduced to a level that will prevent the virus from spreading uncontrollably in the coming months. Only this measure, together with a functioning monitoring of the infection process, seriously protect against dangerous mutants: If the number of viruses is radically limited, the pathogen is given fewer opportunities to form new, unpredictable variants.

Kalajdzic waves a series record at VfB Stuttgart – gallery of...

Pope with a bare bottom: “Titanic” is thrown out of Google...

Lockdown will be extended until mid-February – including tightening

“Everyone trusts him to do that”: lobbying for Loddar (III)

Who is the group around “Captain Future” ?: Corona skeptics are...