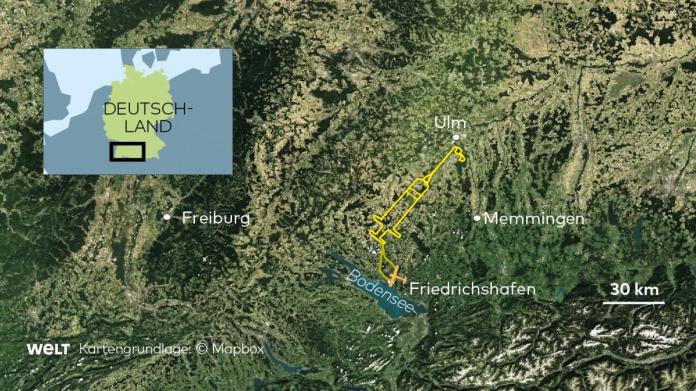 The pilot takes off in Friedrichshafen, stays in the air for less than two hours and then lands back in Friedrichshafen. What he’s been drawing in the sky in the meantime is spectacular – and has a serious background.

AOn the Sunday after Christmas, vaccinations against the corona virus should start in Germany. To draw attention to the vaccinations, a pilot drew the shape of a syringe on a flight north of Lake Constance. The flight data on Flightradar24.com show that the pilot took off and landed in Friedrichshafen on Wednesday, one day before Christmas Eve, and was in the air for around an hour and 44 minutes for the maneuver.

The pilot was on the way with a Diamond DA20 Katana. The pilot and machine are part of the Friedrichshafen Air Sports Club, as reported by the Swiss news platform “20min”. Samy Kramer was sitting in the pilot’s seat of the Diamond DA20 Katana. He told the Swiss portal: “At the moment I have to collect a lot of flying hours, and instead of just flying like that, I wanted to draw a reminder in the air that you should get vaccinated.”

In Germany, the vaccinations from Sunday should initially include older people over 80 as well as residents and staff in nursing homes, as well as health workers with a very high risk of infection, for example in intensive care units and emergency rooms.

By the end of March, eleven to twelve million vaccine doses should be available. Since the preparation has to be administered twice, this amount would be sufficient for approximately 5.5 to six million people. Federal Minister of Health Jens Spahn (CDU) is assuming that by the summer all citizens in Germany will be able to make a “vaccination offer” – provided that further preparations are approved.

Germany and the pandemic

According to a recent survey, around two thirds of Germans want to be vaccinated against the corona virus. In the survey carried out by the YouGov opinion research institute on behalf of the German Press Agency, 32 percent of those surveyed stated that they wanted to be vaccinated as soon as possible. Another 33 percent are also determined to do so, but still want to wait and see possible consequences of the vaccination for others. 19 percent have decided against a vaccination, 16 percent are still undecided.

A clear majority of 57 percent are also afraid of the side effects of the vaccination. Only a third do not have such fears. Ten percent did not provide any information.