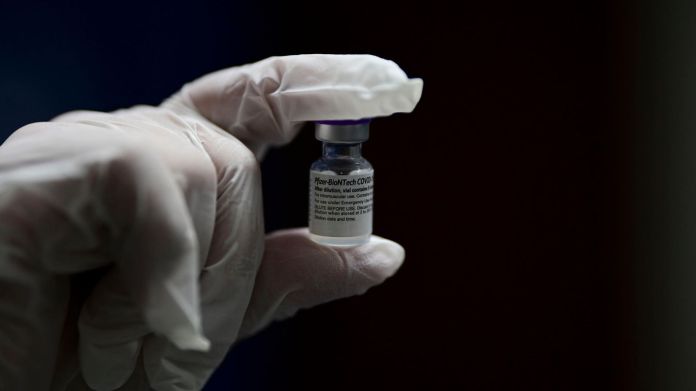 Austria’s ski areas sharpen the security concept after the rush to +++ Hospitals in southern England under pressure +++ Spahn against special rights for vaccinated people +++ News about the coronavirus pandemic in the star ticker.

Error in the preparation: Nursing home employees are given five times the vaccine dose

Because of individual errors in the preparation of the vaccine, eight employees of a nursing home in Stralsund were given five times the dose of the corona vaccine. After the incident on Sunday, the seven women and a man were sent home. As the district administrator of the Vorpommern-Rügen district, Stefan Kerth (SPD), said on Monday, four of the eight people affected have now been admitted to a hospital for observation as a precautionary measure. They showed flu-like symptoms.

The district reported in its announcement that, according to information from the manufacturer Biontech, larger doses of the vaccine in the phase 1 study had already been tested on test subjects without serious consequences. No permanent adverse events were reported. Local reactions at the injection site and flu-like symptoms are dose-dependent and are generally mild to moderate and transient.

A spokeswoman for Biontech confirmed this information. In the tests, amounts of up to 100 micrograms were administered without serious consequences. The usual vaccination dose is 30 micrograms. She referred to the detailed product information of her company. The first sentence reads: “This is a multi-dose vial, the contents of which must be diluted before use.”

In view of the sometimes chaotic conditions caused by numerous day-trippers around Christmas, especially in the Black Forest, the State Ministry of Health has called for restraint on the upcoming long weekend. “We appeal to people not to go on day trips and not to exhaust the existing rules,” said a spokesman for the Baden-Württemberg ministry on Monday. He pointed out that the easing of the exit restrictions for private meetings only applied over the Christmas holidays. Even on New Year’s Eve, New Year’s and the weekend, sports and exercise in the fresh air are only allowed alone, with members of your own household or with another person who does not live in the same household.

A tightening of the corona rules is currently not planned especially for the upcoming long (holiday) weekend, said the spokesman.

Austria’s ski areas sharpen the security concept after the rush

Some ski areas in Austria are sharpening their security concept after the sometimes heavy rush at the weekend. This included a further limitation of parking spaces, more space to queue and more stewards, announced the state of Upper Austria. In the local ski areas Hinterstoder, Wurzeralm and Kasberg there was a big rush on Sunday when the weather was nice.

Due to the sharp increase in the number of new corona infections, space in British hospitals is becoming scarce. The clinics are filled “from wall to wall” with Covid-19 patients, the head of the emergency physicians association RCEM, Katherine Henderson, told the BBC. There are patients with corona symptoms and patients with other diseases who would then also test positive for corona, she said. According to the latest government figures, more than 22,000 corona patients are being treated in hospitals.

Over 19 million corona infections in the USA

In the United States, over 19 million people have been infected with the coronavirus since the pandemic began. On Sunday, 150,094 new infections and 1209 deaths with a confirmed coronavirus infection were recorded within one day, according to data from the Johns Hopkins University (JHU) in Baltimore on Monday. The significantly lower values ​​are probably due to reduced test capacities over the Christmas holidays.

The number of people who died with or from the corona virus has exceeded the limit of 30,000 in Germany. The health authorities reported 348 more deaths within 24 hours – the number rose to 30,126, as the Robert Koch Institute (RKI) announced on Monday morning. In addition, 10,976 new corona infections were reported.

The number of newly infected people and the number of victims are only partially comparable with the values ​​of the previous week, since the RKI expected a lower number of tests and fewer reports from the health authorities during the holidays and at the turn of the year. Exactly one week ago, 16,643 new infections were reported within one day. The highest number of deaths was recorded on December 16, at 952.

The number of new infections reported to the health authorities within seven days per 100,000 inhabitants (seven-day incidence) was 157.8 on Monday morning. Its previous high was reached last Tuesday at 197.6. The differences between the federal states are enormous, however: Saxony had the highest incidences on Monday with 371.3 and Thuringia with 288.2, Mecklenburg-Western Pomerania had the lowest value with 77.0. Since the beginning of the pandemic, the RKI has counted 1,651,834 detected infections with Sars-CoV-2 in Germany (as of December 28, 00.00 a.m.). The RKI stated the number of those who had recovered at around 1,255,700. According to the RKI report on Sunday, the nationwide seven-day R value was 0.83 (Saturday: 0.89). This R value means that 100 infected people theoretically infect 83 more people.

“Nobody should claim special rights until everyone has had a chance to vaccinate.” This mutual respect holds the nation together. “We are fighting the pandemic together – and we will only overcome it together.” At the weekend, the vaccinations against the corona virus began in Germany. Federal Interior Minister Horst Seehofer (CSU) also spoke out against special rights.

South Africa was the first country on the continent to have exceeded one million proven corona cases. The numerically hardest hit country in Africa has documented 1,004,413 cases since March amid a second wave of infections, the Ministry of Health announced on Sunday evening. A new variant of the Sars-CoV-2 virus is circulating in South Africa, which is considered to be the driver of the new wave of infections. The rate of spread has increased as a result. Since the mutated virus was announced, many countries have therefore imposed restrictions on travelers from South Africa.

The education ministers of the federal states want to discuss in the next few days how to proceed with school lessons. KMK President Stefanie Hubig (SPD) announced on Monday night in a podcast of the editorial network that the Conference of Ministers of Education and Cultural Affairs (KMK) on the situation of schools will meet before the round of country leaders with Federal Chancellor Angela Merkel (CDU) planned for January 5 Germany (RND). When deciding on school lessons, it is important to look at how the corona infection numbers would have developed by then, said Hubig, who is the education minister in Rhineland-Palatinate.

After the start of the corona vaccinations in Germany, there are increasing demands for a significant acceleration in vaccine production. FDP boss Christian Lindner said on Sunday evening in the Internet program of the “Bild” newspaper that “crisis production” of the vaccine was needed in the current crisis situation. All legal, economic, political and technological prerequisites must be created so that vaccination can take place more quickly.

“It is a question of life and death, a question of our freedom, and it is a question of survival for our economy too. Because it is already in the intensive care unit,” said Lindner. Specifically, the FDP chairman suggested that the vaccine by the Mainz company Biontech and its US partner Pfizer may be produced under license by other manufacturers.

DFB Cup in Leverkusen: Eintracht Frankfurt relies on the surprise |...

The assassin’s father wants the weapons back

The Reimanns (RTL2): A world is collapsing for Manu Reimann –...

Berlin is fighting for the magic of Christmas