Potsdam / Berlin (dpa / bb) – In Berlin and Brandenburg it is slippery on Tuesday with light frost and up to minus one degree in areas.

The German Weather Service (DWD) expects maximum values ​​between two and five degrees during the day. It usually remains free of precipitation.

In the Prignitz-Uckermark-Havelland area, the meteorologists are expecting lots of clouds on Wednesday, but elsewhere it will initially be mostly sunny. In the afternoon, the cloud cover then also reaches the Berlin area and closes until the evening. It can get a bit wet in places, but most of the time it stays dry, according to the DWD. The thermometer will probably show three to five degrees.

For New Year’s Eve, the DWD announces sunshine next to cloud fields. Rain is not expected. The temperatures do not change compared to the previous day.
© dpa

The catch-up game of the 3rd division in the live ticker:...

“The mutations are there”: Berlin’s Senator for Health warns about B117...

Assassin’s Creed: Fans solve the biggest puzzle in the series

Corona crisis in Berlin: Senate is not planning any easing over... 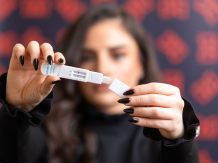 Xiaomi breaks every rule: this phone changes everything

15 percent of Germans doubt the existence of the corona virus