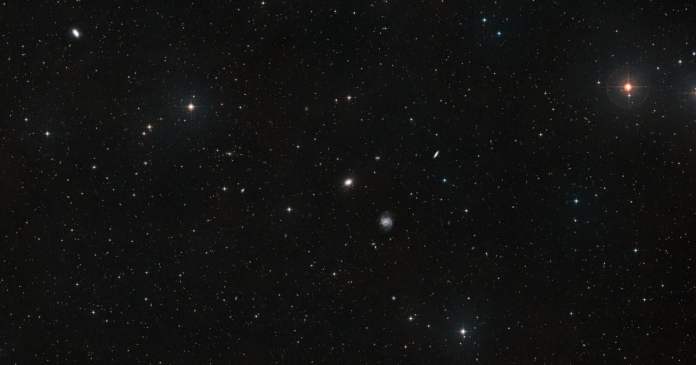 The galaxy NGC 1052-DF4 was discovered last year. It is 44 million light years away. The problem is that it shouldn’t actually exist like that.

It is an ultra-diffuse galaxy (UDG), i.e. a large galaxy with little brightness. Researchers therefore assume that such galaxies contain a lot of dark matter but few stars.

But DF4 has almost no dark matter at all. It was only the second UDG ever discovered to contain hardly any dark matter, reports Science Alert. The first was NGC 1052-DF2.

The riddle about DF2 has now been clarified. The galaxy is closer to Earth than expected, which is why the original calculations were wrong. According to the new calculations, it has a normal amount of dark matter for UDG.

But that didn’t help the astronomers in the case of DF4. A calculation error was ruled out. Dark matter makes up just one percent of the galaxy’s mass. That would mean that all previous assumptions about dark matter are wrong.

Dark matter is considered to be the glue that holds the universe together. Without dark matter, the stars will not contract and galaxies will not form. Without galaxies, there are no planets in habitable zones and therefore no life in space – this also applies to the earth.

The researchers do not currently know exactly what dark matter is. In addition, it is not possible to track them down directly. We only know that most galaxies have more gravity than is possible due to their measurable mass. That difference is dark matter.

So how can DF4 have come about without dark matter? In order to uncover the secret, powerful telescopes were aimed at DF4. With the IAC80, the Gran Telescopio Canarias and the Hubble Space Telescope, they found that stars are being pulled out of DF4.

The culprit is the much larger spiral galaxy NGC 1035. This neighbor of DF4 has such strong gravity that stars from DF4 have already detached in the outer regions. The core of DF4 is still intact.

“This is neither a crisis nor a catastrophe” – Berliner Zeitung

DeepFake Hack at ?? The Mandalorian ?? more realistic than...