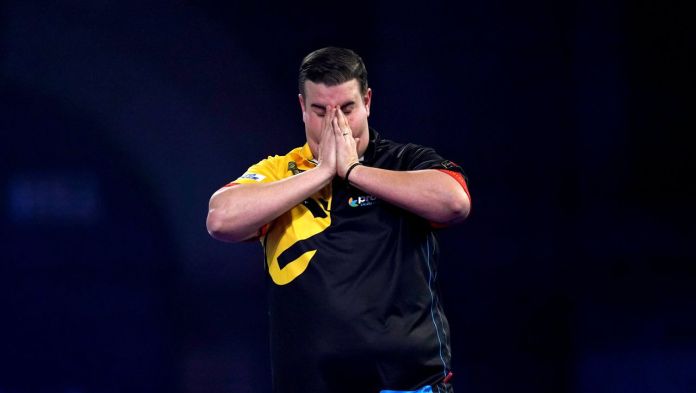 Gabriel Clemens will probably need some time to be happy. Two days after he was the first German ever to reach the round of 16 of the Darts World Championship of the Professional Darts Corporation (PDC), the Saarlander failed in a dramatic game despite seven match darts 3: 4 to Krzysztof Ratajski. The quarter-finals, in which a feasible opponent would have waited with Stephen Bunting or Ryan Searle, Clemens missed several millimeters.
A semi-final with German participation at the Darts World Cup 2021 might have triggered exactly what the PDC has wanted for so long: a big darts boom in Germany.

The head of the PDC, Barry Hearn, turned the unspectacular fringe sport into a spectacle. He gave the players nicknames, made them run like wrestlers with “walk-on songs” towards the stage and accompanied by scantily clad women. So the tournaments became a mixture of sporting event and party. With great success in Germany.

Hearn had early identified Germany as the most important market outside of Great Britain. “I need a top player, a Boris Becker with arrows,” said Hearn after Max Hopp beat Mervyn King for the first time at the 2015 World Cup, a well-known opponent at the World Cup. After his Wimbledon victory in 1985, Becker had triggered a real tennis boom in Germany.

Even without a Boris Becker with arrows, Germany is the number one growth market for PDC. In recent years, around a quarter of the tickets for the World Cup in London’s Alexandra Palace have regularly gone to Germany.

Most of the tournaments of the European Tour launched in 2012 take place in this country. The halls are regularly full. According to Hearn, there were around 50 spectators at the first event a little over eight years ago.

Nowhere else do you get these audience figures, nowhere else can the PDC earn so much money. The broadcast is also worthwhile for the television channel Sport1, which achieves new record ratings every year. The game between Clemens and Wright was followed by more than 1.2 million viewers. In addition, there are those who saw the game on the DAZN streaming service or on pdc.tv.
Despite all the enthusiasm for darts, Germany has no player in the top 20 in the world, not one who would be considered a serious contender for the world title. Why is that?

The most important reason for this is probably the lack of a structural foundation in Germany. There are various clubs and also a darts Bundesliga. However, the offspring is often recruited to a large extent from the children of club members or the ambitious recreational players who switch from electronic darts to steel darts.

It is completely different in Great Britain and the Netherlands. In England arrow throwing has long been a popular sport, in the Netherlands you can play darts in many schools. This is how the number one in the world, Michael van Gerwen, came into contact with the sport.

Even the pub image, which darts still – and not entirely wrongly – clings to, does not appeal to everyone who is interested. Even in Germany, official ranking tournaments do not take place in restaurants, but many clubs still have these as a venue.

In addition, the few German darts professionals often have to travel long distances to train with other strong players. The density of semi or full professionals is significantly higher in the Netherlands and especially in Great Britain. This is one of the reasons why players like the South African Devon Petersen or Diogo Portela emigrated from Brazil to England in order to have training partners at the highest level there.

Last but not least, the step into being a professional is expensive and associated with risks. Many tournaments are in England, a season on the Pro Tour brings with it at least 10,000 euros in travel and subsistence costs, and it is not always easy to find potent sponsors. And prize money is only for victories.

Successes like that of Clemens could ensure that even more people in Germany are enthusiastic about darts and want to play themselves. Maybe Clemens will become the Boris Becker of darts.

US Capitol in Washington: Congress wants to continue certification of election...

“Bergdoktor” star Andrea Gerhard: What she thought of while having sex...

Trump signs the new corona aid program after all

Switzerland has already failed in the quarter-finals – world champion Norway...