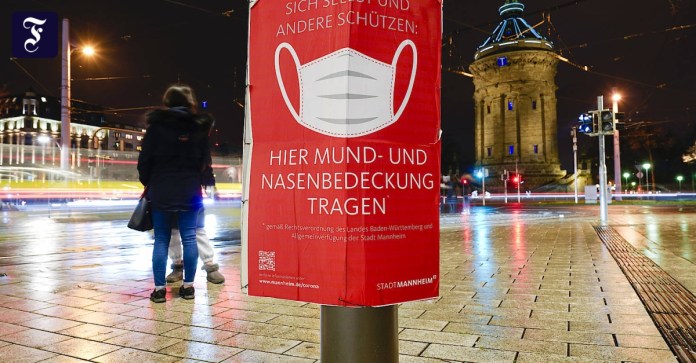 PPoliticians from the federal and state levels are calling for tougher restrictions on hotspots with very high numbers of corona infections. The Bavarian cabinet had already decided on new measures on Sunday. Another meeting of the federal and state governments before Christmas is also planned. So far, a new prime ministerial conference is planned for January 4th.

Chancellery chief Helge Braun reiterated the goal on Sunday evening to get below the mark of 50 new infections per 100,000 inhabitants per week. Mecklenburg-Western Pomerania and Schleswig-Holstein – the two countries with the lowest number of infections – also exceeded the threshold on Sunday. But there are always counties that exceed the value of 200 new infections per 100,000 inhabitants within seven days. Saxony is currently particularly affected.

In the “Bild” talk, Braun said “The right questions”, “at least in the hotspots we will have to make really clear tightening”. Every region, every federal state and every district must have a dynamic that quickly falls below 50 new infections per 100,000 inhabitants per week. If there is a willingness on the part of the federal states to do something together against the hotspots, then the federal government will be there immediately, said Braun.

“Have another chat over Christmas”

The SPD health expert Karl Lauterbach also called for a new federal-state round this week. From his point of view, the shops should close “at least two weeks” after Christmas, he told the “Süddeutsche Zeitung”. He had made a similar statement in the “Tagesspiegel” and in the newspapers of the Funke media group. At the end of November, the federal and state governments had only generally agreed that even more stringent measures would be taken in the event of particularly high infection levels with an incidence of over 200 new infections per 100,000 inhabitants per week.

The federal and state governments had agreed to allow ten people plus children to attend family reunions from December 23 to January 1. In Bavaria, the cabinet decided to maintain the planned easing only from December 23 to 26. Now in Bavaria, meetings over two households with a maximum of ten people are only allowed from the day before Christmas Eve until Christmas Day. Otherwise a maximum of five people from two households are allowed together. Baden-Württemberg already has a similar regulation. In Berlin, a maximum of five people are allowed over the entire holidays.

Saxony has to “readjust”

Other federal states are also considering moving away from easing over the holidays. Saxony’s Prime Minister Michael Kretschmer (CDU) said on Sunday evening in the ZDF program “Berlin direkt” that it had to be “readjusted” in the hotspots. “We talk in the government about what other options there are. We will certainly make further decisions in the course of this week. “

Hesse’s Prime Minister Volker Bouffier said on Sunday evening in the ARD “Report from Berlin” that he believes that a curfew is necessary for incidence values ​​over 200. Thuringia’s Prime Minister Bodo Ramelow (left) was quoted by the Funke media group as saying: “There will be no relief for Christmas and New Year’s Eve.” The cabinet should discuss this on Tuesday.

The Saarland Prime Minister Tobias Hans (CDU) had warned in the “Augsburger Allgemeine” (Saturday): “One thing is clear: We must not take any risks, not even on New Year’s Eve.” Chancellor Braun emphasized that the scope until New Year’s Eve was intended for People who have to work over Christmas. However, this regulation should not be a gateway for millions of others to celebrate New Year’s Eve parties. Braun advertised Christmas visits until 27./28. December limit.

Politicians are concerned not only about the persistently high number of new infections, but also about the increased number of deaths as a result of coronavirus infection. The previous high was registered with 487 deaths last Wednesday. Braun warned against getting used to such numbers. Federal Health Minister Jens Spahn (CDU) said in the RTL annual review on Sunday evening: “We are currently talking a lot about how we celebrate Christmas. These people won’t celebrate Christmas anymore. “

The CDU politician also called for more solidarity in society. While some “with 40 or 50 men at the mulled wine stand”, nurses were working around the clock at the same time and gave “everything to enable people to survive”, emphasized the Minister of Health.

Meanwhile, Braun said he was expecting the vaccination to start at the beginning of 2021. “I expect it to start very early next year in the very first few days,” said Braun in the “Bild” talk.

Germany must use the Corona emergency brake

Frankfurt am Main: Traffic accident on the A 5 between Westkreuz...

Defense pleads in the Windreich trial in Stuttgart