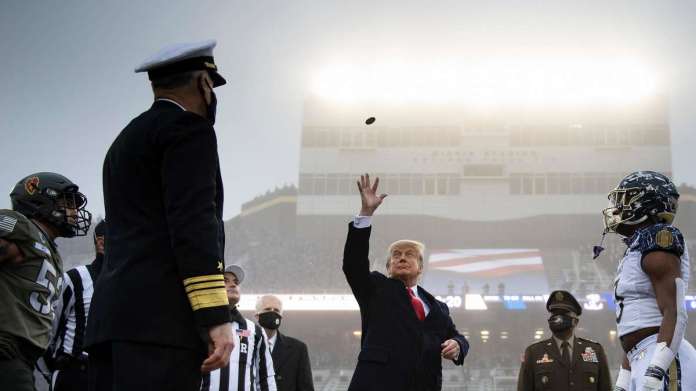 Donald Trump runs a quirky online shop. Donald Trump Jr.’s girlfriend is now apparently an influencer. And that’s not all.

Washington D.C. – Donald Trump, voted out US President, should be highly indebted. Many observers are therefore already wondering what Trumpwho after losing to the Democrat Joe Biden in the US election 2020 must leave the White House, plans in the future. There is talk of having its own media company, as its former house broadcaster Fox News has largely turned its back on it, as it is still making allegations of electoral fraud without giving any evidence.

It is considered likely that Trump himself with his wife Melania Trump and the youngest son Barron Trump on his luxury estate Mar-a-Lago will withdraw in Florida. A divorce from Melania Trump is also possible, as this is rumored to be unhappy. His oldest daughter too Ivanka Trump should with husband Jared Kushner want to move to Florida.

There is also speculation about what Trump make money in the future and preserve his fortune. Books by Donald Trump and his wife Melania about their time in the White House are possible. Another possibility besides your own ultra-right media company is revealed by looking at Kimberly Guilfoyle, the current girlfriend of Trumps eldest son Donald Trump Jr. .

Said friend is also known as a former Fox News host. She was also a senior advisor on Trump’s campaign team and on the social media team at Ivanka Trump active.

US election 2020: Donald Trump apparently wants to raise money with a fan shop

Kimberly Guilfoyle was also accused of sexual harassment by former Fox News employees. Now operates Guilfoyle apparently as a personal influencer Trumps. As the “Vanity Fair” reports, advertises Guilfoyle for the online shop of Trump. There you can Trump-Fans and supporters: inside of the voted out US presidents stock up on all sorts of bizarre fan articles. From golf accessories, cosmetics, clothing and caps, almost everything is included and with the logo of the Still-US President Mistake. Particularly bizarre: It can be a counterfeit gold bar with the Trump– Acquire the logo.

Apparently not all products are “Made in America” because there is a separate category for this in the shop. This is especially bizarre there Trump wanted to give priority to American production and companies with its economic policy and its “Make America Great Again” motto.

Ivanka Trump: does she want to follow in the footsteps of her father Donald Trump?

The US correspondent Annie Karni made a tweet about the influencer activities in the social networks of Trumps Future daughter-in-law attentive. In addition, there is speculation that Trumpism with the departure Trumps won’t go away from the White House. It is possible that the 74-year-old will run again in the 2024 presidential election. However, observers: inside it seems more likely that Ivanka and her husband Jared Kushner will follow in Donald Trump’s footsteps.

Donald Trump: Online shop on the Internet once again reveals conflicts of interest

It was above all Ivanka Trump already active as a consultant for her father and equipped in Trumps Even order state visits. But also here come Guilfoule and Donald Trump Jr. into play: According to “CNN” they should try to increase their influence on the Republican National Committee. The organ of the Republican Party in the USA coordinates fundraising and campaign strategy for the Republicans.

„Donald Trump and Kimberly allegedly have their eyes on the RNC, either they want to take it over or someone from their circle should take it over, ”an anonymous source from the White House is said to have revealed. The other children of Trump, Eric Trump and Tiffany Trump it is said that there are fewer ambitions for a successor than the two older children.

In any case, the fan shop seems to be just a means for the elected US president to tinker with his legend. It’s not the first time Donald Trump Conflicts of interest are accused. (Delia Friess)

Georgina in despair: “Kubilay belongs in the slap!”

So S04 became a relegation candidate

Permanent bans? Remove illegal icons? This is how EA...

Visage Raises $ 7M in Series A funding led by First...

Good to know: This applies from Sunday when entering Germany