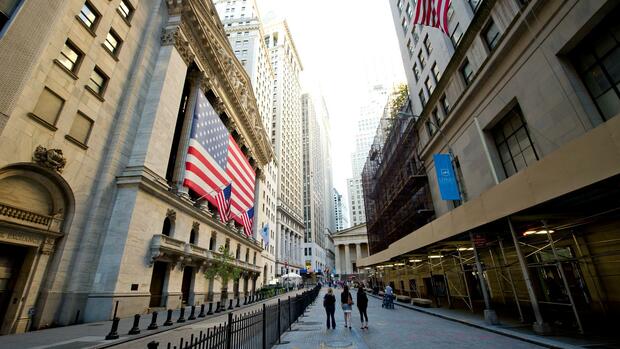 The New York Stock Exchange is located on the famous street.

New York, Washington After a record hunt, the US stock exchanges have given up and turned into the red. The US standard value index Dow Jones closed on Tuesday 0.2 percent lower to 30,335 points. The technology-heavy Nasdaq lost 0.4 percent to 12,850 points. The broad S&P 500 lost 0.2 percent to 3727 points. All three market barometers had set new records in early trading.

The prospect of government and monetary policy aid to overcome the coronavirus pandemic initially drove the stock exchanges, said Naeem Aslam, chief market analyst at brokerage firm Avatrade. Wall Street also received support from the approval of the US House of Representatives for President Donald Trump’s demand for an increase in the one-off payments for the unemployed. Aslam warned, it was unlikely that the Republican-dominated Senate would approve the increase.

Thanks to the mass vaccinations against the corona virus that had started, investors were optimistic about the future, said analyst Christian Henke from the brokerage house IG. “The end of the tunnel is getting closer and closer.” In this picture, speculations about an imminent approval of the coronavirus vaccine from Astra-Zeneca fit. The US-listed shares of the pharmaceutical company rose by one percent.

Wall Street expert Koch: “ Rally is on course, but the year is over for market participants”

Boeing: A few weeks after the end of the flight ban, a passenger flight with the Boeing 737 Max aircraft took off again for the first time on Tuesday. American Airlines starts the route from Miami to New York with the aircraft, which has been technically completely overhauled after two crashes. For Boeing, it is a further step out of the worst crisis in the company’s more than 100 years of history, which was made even worse by the corona shock in aviation. Boeing’s shares rise 0.1 percent.

Fiat Chrysler: According to Polish Deputy Prime Minister Jaroslaw Gowin, the automaker plans to invest around $ 2.5 billion in its plant in Tychy, Poland. The plant is to be modernized to produce hybrid and electric versions of the Jeep, Fiat and Alfa Romeo models. Fiat Chrysler shares still lost 0.1 percent.

Arcturus Therapeutics: The San Diego-based biotech company’s shares plummet over 50 percent to below $ 43 after data was released on its vaccine candidate for Covid-19. The group speaks of favorable study results. Barclays, however, described the preliminary data as “disappointing” and lowered the rating to “equal weight” from “overweight”. The price target was lowered from $ 68 to $ 46, reflecting “the lower chances of success and market penetration.”

Intel: Intel was also on the shopping lists with a price increase of almost five percent. The activist hedge fund Third Point, which is also an Intel shareholder, demands that the world’s largest chip manufacturer examine strategic alternatives.

Snap: The shares of the operator of the messenger service Snapchat, Snap, rose 6.2 percent after the bank Goldman Sachs had raised its price target.

Walt Disney: The rapid spread of its Disney plus streaming service is giving the price a boost. The entertainment company’s stocks give up their initial profits anyway. In between, the stock had hit a record high of $ 180. According to a media report, the Disney plus app was downloaded 2.3 million times over the Christmas weekend. This is an increase of 28 percent compared to the previous weekend.

The competitor HBO Max, which belongs to the telecommunications group AT&T, posted the highest number of downloads for its app within one day thanks to the premiere of “Wonder Woman 1984” at Christmas. AT&T shares initially rose before closing in a small minus.

“People with my eloquence”: Gottschalk learns from the racism debate

The months will continue to be tough: Spahn: Corona rules do...

The bridge builder for the Internet of tomorrow