USA: Sentiment in the service sector is clouding over somewhat

TEMPE – The mood among US service providers has deteriorated a little less than expected in November. The purchasing managers index of the Institute for Supply Management (ISM) fell compared to the previous month by 0.7 points to 55.9 points, as the institute announced on Thursday in Tempe. Analysts had expected an average decrease to 55.8 points.

WASHINGTON – In the United States, the number of initial jobless claims has fallen surprisingly significantly. Last week, 712,000 people applied for assistance, the Department of Labor announced in Washington on Thursday. That is 75,000 less than in the previous week. Analysts had only expected an average of 775,000 applications.

LONDON – The second wave of corona infections has significantly dampened economic sentiment in the euro area. The purchasing managers index collected by the research company IHS Markit fell in November from 50.0 points in the previous month to 45.3 points, IHS Markit announced on Thursday in London after a second estimate. The indicator thus suggests an economic contraction. However, it is slightly higher than was determined in an initial estimate.

LUXEMBOURG – Retail sales in the Eurozone rose surprisingly significantly in October. Sales rose by 1.5 percent, seasonally adjusted, compared to the previous month, as the Eurostat statistics office announced in Luxembourg on Thursday. Analysts had only expected an increase of 0.7 percent. In September they had fallen by 1.7 percent.

China: Sentiment in the service sector continues to improve

BEIJING / FRANKFURT – In China, the mood among service providers brightened further in November. The index for the mood of purchasing managers, which was collected by the business magazine “Caixin”, rose by 1.0 points to 57.8 points, according to a statement published on Thursday. Economists, however, had expected a slight decrease to 56.4 points. The “Caixin” indicator primarily shows the mood in smaller and private companies.

LONDON – Business sentiment in the UK deteriorated less than expected in November. The purchasing managers index fell by 3.1 points to 49.0 points, as the research company IHS Markit announced on Thursday in London according to a second estimate. Analysts had expected a confirmation of the initial estimate of 47.4 points. With a value below 50 points, the indicator signals a decline in economic activity.

MAGDEBURG – Despite the ongoing Corona crisis, the number of company bankruptcies remains low, according to a study. The Institute for Economic Research in Halle (IWH) announced on Thursday that 684 corporate insolvencies were reported in November. The IWH researchers reported the lowest numbers since the beginning of this year. A good 70 more cases were reported in October. For the period between January and May, the IWH insolvency trend reported between 900 and 1000 affected partnerships and corporations per month.

BASEL – The Swiss National Bank (SNB) and the Bank for International Settlements (BIS) have tested the possibilities of purely digital central bank money. The three institutions announced on Thursday in Basel that an experiment in cooperation with the digital exchange SDX was successful. However, the partners emphasized that this was at best a first step towards the introduction of digital central bank money. Many questions are still unanswered, said Andrea Maechler from the SNB Governing Board.

NRNBERG – The second corona wave has only slightly dampened the prospects on the labor markets according to the findings of the Nuremberg Institute for Labor Market and Occupational Research (IAB). The European Labor Barometer as a leading indicator points to a moderately negative development in the next few months, the research institute of the Federal Employment Agency announced on Thursday in Nuremberg. The barometer is operated by a network of European employment services in 14 countries.

British logistics association: catching up to do with Brexit preparations

LONDON – The head of the British logistics association UK Warehousing Association, Peter Ward, sees a lot of catching up to do in the preparations for the end of the Brexit transition phase. “The processes at the borders will change,” said Ward of the German press agency. “That is the case with or without a trade pact. This message has not yet reached all companies.” At the turn of the year the Brexit transition phase ends, during which until the end of the year largely the same rules applied as before Great Britain left the EU.

ROUNDUP: You are reading a summary in the economic overview. There are several reports on this topic on the dpa-AFX news service.

The nerves are on edge in the Super League. CC...

Delmenhorst near Bremen: Police end illegal party – and have to... 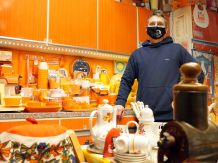 The Berlin merchants are hit hard: Retail before the lockdown: “There...