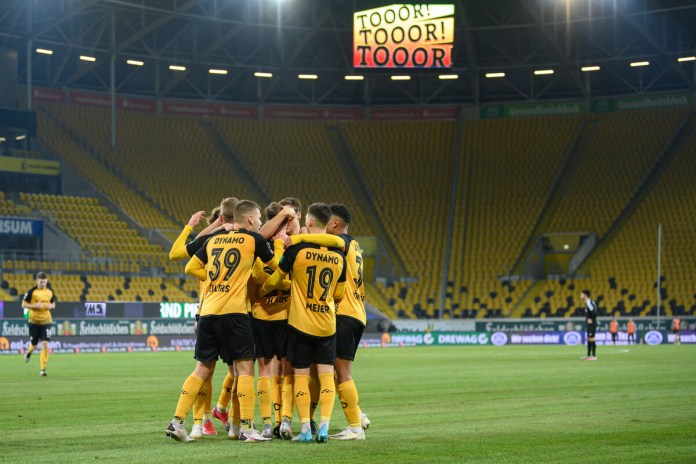 Dresden. Five goals, high speed, and lots of chances – that was a real top game. With the success, Dynamo is expanding a series that shows how dominant the team is currently in the 3rd division: seven games in a row without defeat, including six wins. The 4-1 win against SC Verl on Tuesday evening is also important for another statistic – here you can read the live ticker.

Now Dynamo is mathematically leader of the table and can no longer be overtaken by Verl even with two wins in the catch-up games. It is already clear that Dynamo will take the short winter break as the front runner. “I’m not interested in the table at the moment. It will be very tight, ”said coach Markus Kauczinski. It’s just a snapshot. That’s true, but the lead on the non-promotion places is still growing continuously.

The fact that the top game was not lost was again due to the strong defense, with 13 goals conceded after 16 games, the best in league three. And that, although with Sebastian Mai and Marco Hartmann two important stabilizers were missing in the defense. Kauczinski had again called up a back four that had last brought success in the 3-1 victory in Halle after a change.

However, it was not a walk on the newly laid lawn, even if the result suggests something like that. On the contrary: an opponent in the Rudolf Harbig Stadium has not been as dominant as Verl in the first half for a long time. The newcomer from near Bielefeld combined bravely and briskly, there were always points of reference in the interfaces because everyone was on the move. The people of Dresden mostly just followed, often arriving too late – and that was what they thought.

“I’ve never seen a game like this. We play a first half and then lose 1: 4, ”said Verl’s coach Guerini Capretti. His team had seven chances until the break alone – and Dresden was lucky that referee Patrick Hanslbauer did not punish the entry of Robin Becker in the penalty area against Lars Ritzka (20th) as a penalty worthy of foul.

And dynamo? Sometimes even struggled to get over the middle line. “We had problems starting up and our opponents did really well,” said Patrick Weihrauch. Kauczinski saw it similarly: “We neither defended well nor combined well forward. Verl was superior to us in positional play. ”

The first shot on goal gives Dynamo the lead

His team shot on goal only once in the first half – after 43 minutes. But the shot brought the lead. An input from Pascal Sohm was used artistically by Julius Kade to make it 1-0. The goal is worth seeing, but the leadership completely undeserved. It could also be classified under the luck of a league leader. Or with brutal efficiency.

Dynamo had already honored them at the victories in Rostock and Halle. “In the end it is not who plays better, but who scores the goals,” said Capretti, summarizing the 90 minutes. “As a top team, Dresden showed us how to play easily and be effective. We still have to learn that. “

The referee made it exciting again for a short time. He evaluated a shot blocked by incense as a handball in the penalty area – and whistled a penalty. A very controversial decision, after all, Rabihic’s shot hit the arm of Dynamo’s midfielder from very close range. “In my eyes it was a wrong decision. I can’t unscrew my hand, ”said Weihrauch. Zlatko Janjic converted the penalty kick (56th).

Overall, however, the Dresden team appeared more courageous after the break, were more grippy and had opportunities. And they also remained efficient. A shot from substitute Christoph Daferner let go goalkeeper Robin Brüseke clap, Philipp Hosiner put on Weihrauch, who hit the empty goal to 2-1 (68th).

The playmaker was also involved in the third hit. The substitute Ransford-Yeboah Königsdörffer converted his cross with a direct decrease to 3: 1 (75th). “At the moment there is just one conviction, and with the changes we were able to bring quality again,” explained Kauczinski. At 4: 1, Kade had a clear shot (79th).

The return of Justin Eilers was almost drowned in the tor flood. The striker, one of the main pillars of the promotion team at Dynamo in 2016 and then switched to Werder Bremen, came into the game in the 76th minute and even once to the end. For the 32-year-old, who had repeatedly struggled with serious injuries and recently also with financial difficulties after leaving Dresden, it was the fourth short assignment this season – and already a success. It was only at the end of September that he found a new club in Verl and thus postponed the end of his career.

For Verl it was a setback after five games in a row without defeat. Dynamo’s coach nevertheless trusts them to “play for promotion to the end. Verl were one of the best teams that have been here so far. And our victory was too high. ”There is nothing to add to that.

Everything important and worth knowing about Dynamo – compact every Thursday evening in the SCHWARZ-GELB newsletter, and always with a competition. Register now for free.

When do I get the corona vaccination? This is how...

Was Beethoven unable to read his metronome correctly? – Culture...

New TERA update with shadow ruins and dungeon by Rukmia –...

New coronavirus variants: how dangerous are the mutations? The new corona rules at a glance – politics