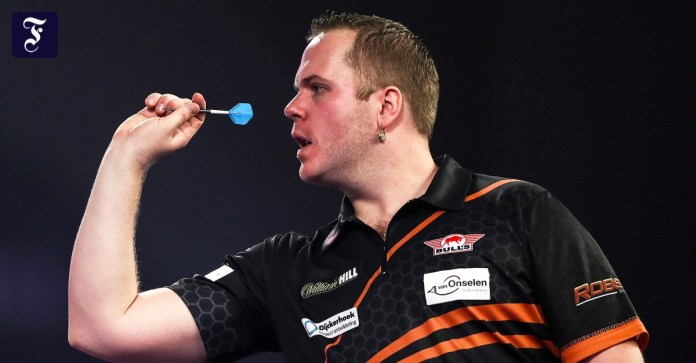 Dhe interview of the “eggplant king” turned out to be a slapstick insert. “Are we already live?” Asked the Dutchman Dirk van Duijvenbode after his World Cup coup against the former darts world champion Rob Cross. Before that, he had puffed his cheeks and made gestures of cheer several times. “Yes, we are live,” said the moderator. The new darts hero first touched his head, turned around before he started again: “I feel good.” Then it broke out of him, van Duijvenbode laughed refreshingly.

The story of the man who, in addition to his arrows career, also works at an eggplant farm, just keeps getting better. With the 3: 2 against the former Champion Cross from England he stunned the scene on Tuesday and reached the third round. He did not respond to Dutch media inquiries about travel restrictions before the match. “I don’t talk about travel because I don’t have to travel if I keep winning,” said the 28-year-old.

In contrast to his opening match, this time van Duijvenbode decided not to bring an aubergine onto the stage. “No, you shouldn’t overstrain things. I love eggplant, my work is related to it – but at some point it will be enough, ”he said. Advertising “DvD” added: “Everyone should eat eggplant.”

Xbox Game Pass for PC: The date for EA Play is...

VR update should take off today; Presentation of the virtual...

ECJ ruling – embedding digital media through framing in the network...