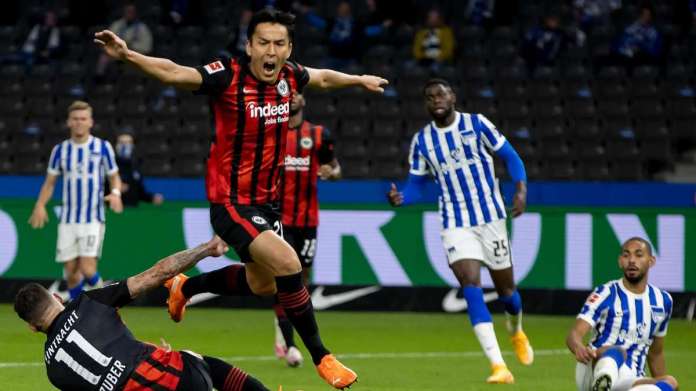 Frankfurt – On Saturday afternoon, the hosts in the city forest were no longer able to provide for the “relief” so popular in football jargon. With the kick-off of the second round Eintracht Frankfurt Difficulty breaking free from Dortmund’s Borussia grip, constructive attacks were a rarity – and that was not due to the surprisingly soapy and bumpy course. Rather, it was due to the general quality, which is undoubtedly in the BVB line-up and which brought it to the field after the restart.

Eintracht Frankfurt against BVB: SGE could have helped impulse from outside

Dem Eintracht game an impulse from outside could have helped, a new force, lively and lively, which creates a fresh breeze. Coach Adi Hütter, however, had his hands tied, he changed first the destroyer Stefan Ilsanker, then Dominik Kohr, aptly nicknamed Hard-Kohr, and Bas Dost, the only remaining striker, who is certainly a lot, but not lively and lively.

An actor like Amin Younes might still have steam in there SGE game can bring, but the 27-year-old had previously in Eintracht training “Hurt”, as Hütter said, which is why he was removed from the squad. The coach admitted: “In the end he would have been a player who would have done us good” because BVB defended “very risky”, “Amin would have been the ideal player.”

The soccer teacher was then even asked if Eintracht Frankfurt did not have to think about stepping up on the transfer market in winter, the offensive power and the staffing left a lot to be desired. Hütter responded to the admission with a fundamental assessment that has political implications. The 50-year-old referred to talented offensive players like Aymen Barkok or Daichi Kamada, whom he wants to promote and not block. “If you bring in new players, you cannot promote the development of the young players. That’s why I don’t want that. ”Apart from that, the club, which has been badly shaken by Corona, does not have the capacity to add personnel.

Dem SGE-Trainer it is a thorn in the side anyway that he is six times the oldest Eintracht-Elf sent into the race. He is now trying to correct this trend with a sense of proportion in the ongoing competition. The average age against Dortmund was 27 years, on the first matchday against Bielefeld it was 29.2. One who drives the cut up is Makoto Hasebewho will turn 37 in January and has been sitting outside for three match days. The Japanese is “one of the best professionals I’ve ever trained,” says Hütter.

But even the seemingly endless career of the clever mind is coming to an end. “His football career will almost certainly come to an end in the summer,” interjects Hütter, surprisingly bluntly. And it is also clear: “When Makoto plays, either Martin Hinteregger or Evan Ndicka doesn’t play.”

Eintracht Frankfurt’s sports policy: Get players, develop them, give them away

Hinteregger is for that Eintracht trainer inviolable, and the 21-year-old Ndicka is considered a diamond in the rough, which must now be used. The French justify the trust with excellent performance, he appears like an old hand. The chain of three (with David Abraham leaving in January as the right link) is also well positioned in this line-up.

But in this case, too, sports politics play a role, because at Ndicka the club philosophy comes into play: Get players, develop, give them away. With him there is the idea, “maybe in the near future to sell it for good money,” says Hütter openly. “He has the talent and the quality to do it.” Ndicka’s market value is 22.5 million. The special thing about it: A transfer fee would be completely in the Eintracht cash register migrate, a participating third party is not interposed with him. Even seldom these days. (Ingo Durstewitz and Thomas Kilchenstein)

What is behind the “No-Covid” strategy – politics

Dear Puls4, what is this costume supposed to represent? –...

Corona lockdown: This is what the federal states have planned for...