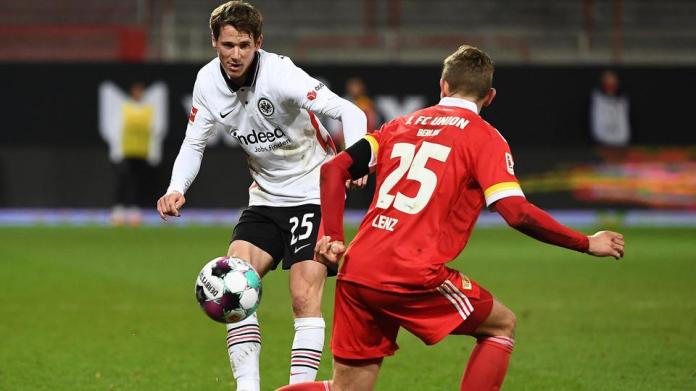 After a long, very long time as a reservist, Erik Durm is suddenly in demand again at Eintracht Frankfurt. A new feeling for the full-back. Nevertheless, the regular location remains fragile.

Erik Durm, one can guess, must have fallen out of the clouds. The 2014 world champions have not been on the pitch for a single minute this Bundesliga season, and most of the time they have not even been in the Eintracht Frankfurt squad. And then came the morning before the eighth matchday against RB Leipzig. Durm, probably happy to be on the squad at least once, looks at the starting XI – and sees his name. “I can’t say that there was any sign of it,” the full-back now admits. Anyway, Durm is back, he’s a little like the unity phoenix from the ashes.

The 28-year-old completed the game against Leipzig properly, and as a reward he was back in the starting line-up for a week against Union Berlin. Here, too, he doesn’t play like someone who was left out for months. The question remains: is Durm now even a regular at the Hessen team? “The team welcomed me very well. I am trying to keep offering myself,” explains the ex-Dortmund man diplomatically.

At this point there is a content of recommended by our editorial team YouTube (Video). Since you have deactivated Javascript in your browser, it cannot be displayed here. The following link opens the content on the provider’s website.

The chances are not bad, but the full-back does not have a free ticket either. Because on the one hand he has a lot of competition with Almamy Touré, Danny da Costa and Timothy Chandler, on the other hand, no one from this trio has so far convinced Eintracht coach Adi Hütter completely.

Touré shows more than just good approaches, but always has inexplicable mistakes in his game, since Costa seems to be completely left out at Hütter after a starting eleven on the first matchday and Chandler prefers to use the Frankfurt coach a position further up front. If he lets him play at all. In short: no one has really been able to convince in this position. If Durm doesn’t do that either, the space is probably gone again.

Against Dortmund he should get another starting eleven chance on Saturday (3:30 p.m.). Also because, like Leipzig, BVB will roll towards the Eintracht defensive at a high speed. The subject of speed was already against RB the pendulum that, according to Hütter, had knocked out for Durm. Speed ​​versus speed – this is how the Eintracht coach could act on Saturday.

“They are going to be strong opponents. They have an outstanding line-up. Let’s hope that they will drop seeds against Rome in the Champions League,” explains Durm, for whom the game against the old club is “always something special Time there was consistently positive. “

“Never put your head in the sand”

Durm cannot say that about his time in Hessen despite the two games against Leipzig and Berlin. “It would be a lie if I said it wasn’t a difficult time for me,” he says honestly about the past few months in waiting. “But I never bury my head in the sand. All of this only increased my motivation.”

You can see the result. And: Even if the regular location remains fragile, Durm now wants more. “It always pays to step on the gas.” Should this result in a place in the first eleven on Saturday, the Eintracht Phoenix should definitely not fall out of the clouds.

“Kneeling in front of the TV”

“Offer to RTL”: Michael Wendler makes a desperate proposal – and...