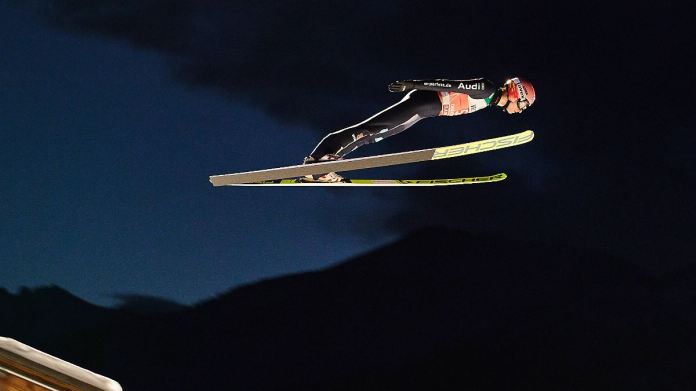 Ski flying world champion Karl Geiger wins the opening jump of the Four Hills Tournament in Oberstdorf. The local hero takes the lead in the first round with a flight of 127.0 m. Markus Eisenbichler experienced a pitch-black first jump, but then increased tremendously.
The high-flyer Karl Geiger gave the German eagles a dream start in the 69th Four Hills Tournament. With his home win in front of a ghostly backdrop on the Schattenbergschanze in Oberstdorf, the nervous local hero secured an excellent position in the fight for the overall victory.

World champion Markus Eisenbichler also kept his tour hopes alive with a terrific race to catch up in the second round in fifth place. For the DSV jumpers it was the first opening win since Severin Freund five years ago. “It was brutal and two very good jumps. My heart was really pumping. If there were still spectators there, it would be perfect. You have to look from day to day and I’ll take on the role of favorites,” said Geiger. “Megagile, I wished him so that he could bring it down for us, he’s just a cool dog,” added Eisenbichler.

Top favorite Halvor Egner Granerud had to be content with fourth place, his compatriot Robert Johansson even missed the second round. Ski flying world champion Geiger (291.1 points), who tested positive for the corona virus two weeks ago, convinced with flights to 127.0 m and 136.5 m and thus stayed ahead of Kamil Stoch (Poland / 288.3 ) and Marius Lindvik (Norway / 285.2). The cheering of the otherwise 27,000 fans in the arena did not materialize, instead “Karle” celebrated his first victory in front of thousands of cardboard comrades in the stands.

Eisenbichler almost with a hill record

Eisenbichler, however, screwed up his first round with a width of 118.0 m and place 27 completely, had not yet to bury his hopes for the tour victory after a set of 142.0 m. “Yesss, boom!” Shouted “Eisei” in relief into the cameras.

After his flight, which was only 1.5 m below the hill record, Eisenbichler was visibly relieved. “The flight was awesome, really cool,” said the Bavarian on ZDF. With a view to the overall victory, he still expects chances: “It’s tight, I have to stick with it.” National coach Stefan Horngacher initially had mixed feelings. “It was a pretty sobering first run for us, but we are right up there,” said the Austrian.

The Polish co-favorites ended up in the top field after the 24-hour Corona Posse. In addition to Stoch, Andrzej Stekala also impressed in seventh place, defending champion Dawid Kubacki came in 15th. “It’s the time of miracles,” Stoch had previously written on Instagram.

Only friend still in the points

On Monday, the Poles were excluded from qualifying in Oberstdorf after their jumper Klemens Muranka tested positive. After repeated negative tests with Muranka and his teammates, the “Go” was finally given, the qualifying result was canceled and all 62 jumpers were allowed to compete.

The German jumpers could not take advantage of the moment, only ex-world champion Severin Freund collected points next to Geiger and Eisenbichler in 25th place. The other DSV athletes around Pius Paschke, Constantin Schmid and Martin Hamann missed the decision of the top 30 when there was a tailwind, as did the problem children around team world champion Richard Freitag and Olympic champion Andreas Wellinger.

On Wednesday the tour entourage travels to Garmisch-Partenkirchen, where on Thursday (2 p.m. / ARD and in the live ticker on ntv.de.) the qualification for the second tournament is due on New Years Day.

Municipality of Kernen regulates daycare fees: This is how the reimbursement...

Karoline Herfurth: She lost her grandmother to Covid-19

The federal and state governments are discussing how to deal with...

Over 30 corona cases in the Philipp-Paulus-Heim in Fellbach: The home...