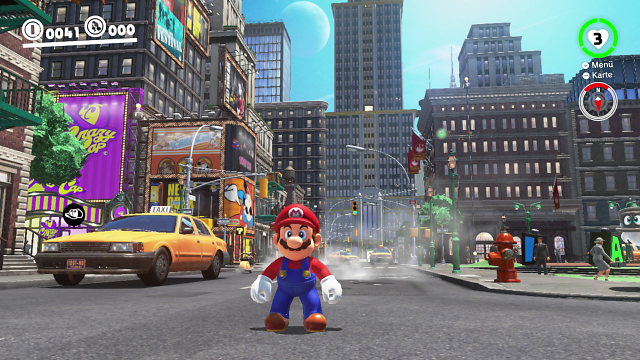 December 24th, 2020 at 3:30 p.m.
of Michael Miskulin –
Some developers have managed to emulate the Nintendo Switch game Super Mario Odyssey on a new Apple M1 computer. The emulation is not perfect and is still too slow for smooth gaming, but it is an impressive proof of concept.

The Nintendo Switch has been able to be emulated on PCs with the Yuzu program for some time. Now emulation is also possible under macOS. Developer “Sera Tonin Brocious” has managed to start the Nintendo Switch game Super Mario Odyssey on Apple’s new M1 ARM computer. She got the Nintendo title on her MacBook Pro, which has an M1 chip, running under macOS 11.0.1.

The ARM computers from Apple work with a similar processor as the Nintendo Switch, which simplifies emulation. While an M1 processor with eight cores works inside the MacBook Pro, a Cortex-A57 processor with four cores does its work in the Switch. The switch emulator Yuzu used here uses the 3D graphics API Vulkan, which is implemented on Apple’s own graphics engine Metal with the help of MoltenVK runtime.

However, the emulation of Super Mario Odyssey is not really playable. There are a lot of graphical errors, and besides crash issues, the speed is far too slow for smooth gaming. However, it is a passable proof of concept. Since the implementation on the metal graphics engine is not yet perfect, MoltenVK is still performing too slowly. The M1 chip doesn’t help at the moment. The developers at MoltenVK want to improve this.

Cyberpunk 2077 runs on Nintendo Switch with a trick

The developer “Sera Tonin Brocious” is also planning a future emulation for iPhone and iPad. All that is required is approval of the Hypervisor.framework for iOS and iPadOS by Apple. “Porting would then be pretty painless,” explains the developer. Apple’s A14 processor is installed in new iPhone and iPad devices, which is related to the M1 chip and thus also to the chip on the Nintendo Switch.

Xbox, Playstation, Game Boy & Co. disassembled and in pictures – who has a PS5 / Xbox Series?

PC gamers do not have a game console. Correct? Not correct! Because just as Modern Talking has sold 20 million records to anyone, some of the PC-Games-Hardware-Extreme users also own a game console. Community members upload photos of their consoles from Microsoft, Nintendo, Sega, Sony & Co. in two picture threads in the PCGHX forum.

In the fight against hate speech and the exploitation of younger gamers, Microsoft, Sony and Nintendo have now launched an initiative. That is planned.

What’s in Firmware Update 11.0 for the Nintendo Switch? There are numerous innovations relating to the transfer of data.

PCGH Plus: Anti-aliasing in games is old hat. But even if technologies have existed for decades, they are subject to change over time. The article comes from PC Games Hardware 03/2018.
more …

Young people rented a villa in Vienna for a Corona party

Storming the Capitol – “If Trump had planned a coup, he...

Chanuka festival in Stuttgart: a light of warmth and hope –...