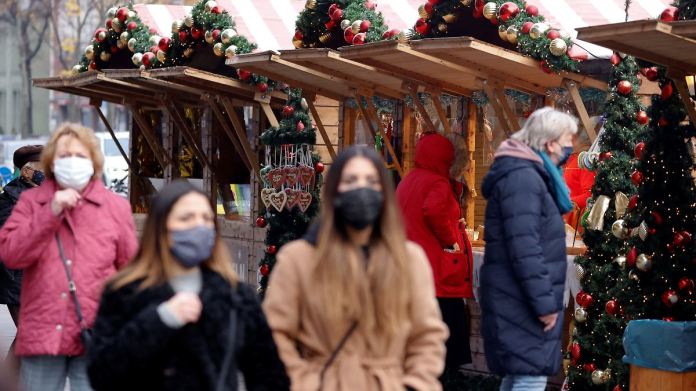 The 30 to 59-year-olds are considered to be the backbone of society, which is why the mood of the “middle generation” is particularly important. In a new survey it is now clear that the Corona crisis is increasingly becoming a burden for them – economically, but above all psychologically.
The corona pandemic is increasingly affecting the mood of the so-called “middle generation”. Every second 30 to 59 year old in Germany feels worse today than before the crisis. This was the result of an Allensbach survey commissioned by the German Insurance Association. The age group is particularly affected by the exceptional pandemic situation. Their daily work changed drastically, they had to look after children for months and sometimes also teach them, and their contacts, especially with older family members, were considerably limited.

Obviously, that sucks your nerves. Only one in five (22 percent) is optimistic about the next twelve months. A year ago, almost half of those surveyed (47 percent) were hopeful. The opinion pollers blame the feeling that the end of the Corona crisis is not in sight for most of them for the dramatic collapse in mood. Only one in five believes in a return to normality within several months. Over 70 percent, on the other hand, prepare for a prolonged exceptional situation.

Worst of all for the “middle generation” is the uncertainty: 70 percent find it unbearable that the end of the crisis cannot be foreseen. The uncertainty outweighs specific restrictions such as visiting bans (50 percent) or factual bans on foreign travel (16 percent).

In addition, a majority of the “middle generation” noted a strong (49 percent) or even very strong (11 percent) change in our society – and not for the better: Around 70 percent complain of increasing aggressiveness and impatience, a good half complain about growing selfishness. There are more fears and insecurity, a growing tendency to disregard rules, increasing selfishness and a widespread retreat into private life. Many see society as less tolerant and have the impression that freedom of expression has decreased. Four out of ten respondents say that good behavior and good manners have lost importance. In contrast, only 13 percent of those questioned see an increasing willingness to help. “Corona acts like a mushroom – the vast majority sees more aggression and egoism than growing solidarity,” said Renate Köcher, managing director of the Allensbach Institute for Demoscopy, when presenting the study results.

The Corona crisis is also clearly causing the “middle generation” to doubt the advantages of an open, globalized economy. Three out of four respondents (75 percent) are very concerned about the economic collateral damage of the Corona crisis. A relative majority (38 percent) believe that the German economy will not be able to defend its strong position in the next few years. At the same time, fewer and fewer people share the impression that the German economy is primarily benefiting from globalization (2020: 48 percent, 2017: 64 percent). Almost one in two (46 percent) blames globalization for the spread of the corona virus around the world, 34 percent do not agree with the statement.

“For the first time, a majority of the ‘middle generation’ reject the idea of ​​globalization. That worries me, because without strong international cooperation, especially in the EU, we will not master either corona or climate change,” emphasized GDV Managing Director Jörg Asmussen. In addition to the corona pandemic, climate change is a major concern of the “middle generation”. Increasing global warming and climate change are major concerns for every second person. However, a majority (63 percent) do not believe that global climate change can still be stopped. Half of the respondents say that too little is being done to protect the climate in Germany.

The “middle generation” is the “top performers” of our society. The more than 35 million people between the ages of 35 and 59 are in the midst of working life, raise children and finance the social security systems. They make up 70 percent of the workforce and generate over 80 percent of taxable income. A total of 1,047 interviews were conducted for the survey between mid-October and early November 2020.

After a rare decline, inflation in China is picking up again...

Berlin & Brandenburg: Frost and rain at Christmas in Berlin and...

FK Austria Wien confident against “in shape” SK Sturm: “It will...

Germany before the lockdown: That is in the draft resolution

Twitter reactions to the Stuttgart “crime scene”: “Three days in this...

Coronavirus in Russia: For vaccination in the opera