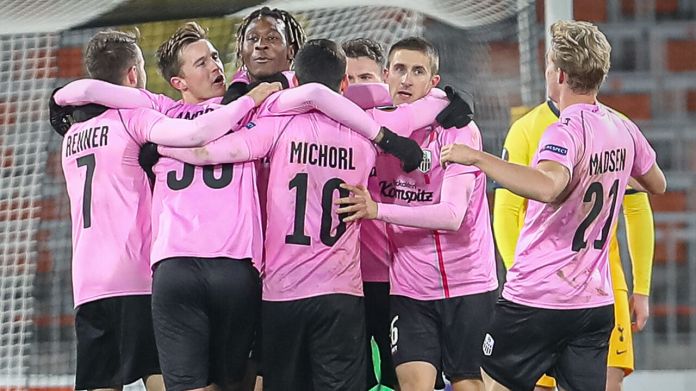 It is a brilliant performance with aftertaste that LASK conjured up on Thursday in the 3: 3 draw against Tottenham on the green in the “Stadium of the City of Linz”, as the home of the athletes in the European Cup is called.

The Upper Austrians were superior to the leaders of the English Premier League for a long time, especially the first half the Linz designed at will. A dream goal by Peter Michorl already gave rise to faint dreams after a victory against the overwhelming English.

But a scene just before the break was emblematic for the game on Thursday. LASK defender Andrade gets the ball after a cross into the penalty area, the referee decides on penalty for Tottenham. Gareth Bale transforms this with the break whistle to equalize.

The hard work that the LASK-Elf had invested suddenly was worth little in points. This is also to be understood as a metaphor for the entire game. The LASK showed a courageous, self-sacrificing performance against poor Londoners, which even demanded respect from their coach, Jose Mourinho (all information >>>). But in the end it doesn’t count. The hard-fought draw marks the end of the Linz Europa League trip, as third in Group J with currently seven points, promotion to the second round is impossible.

The away game at Ludogorets at the designated bottom, which is still without points after five games, nothing more than an annoying compulsory task, which in this intensive section before Christmas probably does not trigger any cheers from the LASK, even if coach Dominik Thalhammer is not the total Promises rotation.

Nonetheless, LASK can be proud of the draw against a team that would normally have to be superior in all areas.

“It was a really good performance by my team,” said head coach and sports director Dominik Thalhammer after the game against Tottenham.

“In the dressing room, the boys were disappointed that they only played a draw. I think that shows how good today’s performance was: Our tactics were very strong, in the first 20 minutes we pressed a lot and forced Tottenham to make mistakes The opponent then only worked with long balls, “said the 50-year-old, who, like Mourinho, would have considered a defeat for the athletes to be unjustified:” But not only against the ball, it was a strong performance with the ball too – everything else as a point win would not have been according to the course of the game.

The numbers related to the game also speak clearly for athletes. LASK fired fourteen shots in the direction of Joe Hart’s box, five of which were aimed directly at goal.

Tottenham only fired eight shots, but there was a rustle in all three attempts at Alexander Schlager’s goal behind the LASK goalkeeper.


The origin of the three hits should definitely be taken into account. Kane’s 1-1 and Dele Alli’s 3-2 were both penalty goals. The 2-1 lead by Son arose from a mistake in the game structure of the Linzers and a squeaky clean switchover action.

The South Korean’s goal will go down in the annals of the game as the only shot on goal that was played out of the game. No wonder that LASK trainer Thalhammer saw a dominant performance by his team.

“I am extremely positive about how we dominated the Premier League leaders. We did our job extremely well. They took advantage of their few situations. The performance was phenomenal, the tactical approach of how we dominated Tottenham. I’m very much proud of the team, “says Thalhammer at Puls 4.

The 50-year-old continues to analyze the Spurs: “Against such an opponent you have to stay highly concentrated for over 90 minutes”.

Thalhammer’s words suggest that the draw against the Londoners also gives the team inspiration. Measuring with a team of top European format is seen as a yardstick.

“The team has developed well in many areas, not just against the ball, but also with the ball,” said Thalhammer about his own team. Postscript: “It shows the way where we have to go in order to be an absolute top team.”

Ultimately, the athletes ended the game with more possession and more passes.


Despite the difficult task in Linz, the score in the parallel game between Ludogorets and Antwerp was of particular interest to the Upper Austrians.

“We knew about it at half time. Even during the second half,” said Thalhammer at the press conference after the game.

The Linz draw would only have kept the chances of the second round alive if Antwerp had lost, but the Belgians won 2-1 in Bulgaria, which is why Thalhammer didn’t want to deal with it any further.

“Today the focus for me is today’s performance. I am very satisfied with that,” summarizes Thalhammer, who names the cause of the unnecessary Europa League loss.

“I think everyone knows where the points were ultimately left behind – namely in the home game against Antwerp,” said the 50-year-old. “Today I see it as very, very positive and I am very satisfied with the performance.”

Man of the match “rewards” himself with a ban

Although no spectators were allowed in the stadium, the people of Linz insisted on calling out a “Man of the Match” on the video screen after the game.

This “award” went to Peter Michorl, who put the athletes in the lead with his first goal in the Europa League group stage.

And what a hit it was that the 25-year-old was able to place in Joe Hart’s goal. In the 42nd minute, the LASK midfield engine took it easy and pulled from about 25 meters, the ball hit the far corner, no chance for the Tottenham goalie.

“We showed an unbelievable game against the leaders of the Premier League,” said Michorl after the game at Puls 4. “We ran behind two times. But we were always on the trigger.”

The game against the team from north London will be remembered for a long time to come, as Michorl suggests. “We showed an incredible performance. A 3: 3 against Tottenham – you can count on it for a long time.”

The 25-year-old, who saves himself the compulsory exercise in Razgrad with his third yellow card in the group phase, knows where the main reason for the bitter end in the group lies despite a draw against Spurs.

“We screwed it up against Antwerp”

“We screwed it up against Antwerp, it wasn’t our best game,” Michorl sums it up, just as accurately as on the field. “But we can step down with our heads held high. With ten points you often advance in the Europa League, unfortunately we were eliminated this year.”

For Linz, the Europa League trip for this season ends unglamorous in the away game against Ludogorets Razgrad. But Thalhammer, Michorl and Co. do not have to despair, despite the fact that they were eliminated, the athletes showed almost consistently good performances.

The runaway victories in qualification against Dunajska Streda and Sporting come to mind, the away game against Antwerp and the tremendous victory against Ludogorets were also impressive.

In the end, it was a red card and a free kick against the Belgians, who left LASK empty-handed.

Maybe not for long, because the Linzers are well on their way again in the Bundesliga to be on the European road in the coming season.

Nespresso is investing 117 million Swiss francs in expanding its production...

After reporting on the homeless: Donors take corona fines – Stuttgart

Economy does not automatically recover after lockdown – comparative studies

Because of the corona pandemic: Germany is meeting climate targets for...

Corona: Retail has recorded the largest increase in sales since 1994