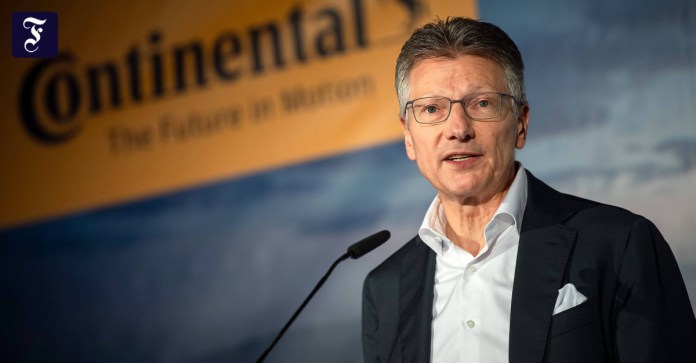 Dhe Continental boss Elmar Degenhart, who resigned prematurely at the end of November, pulled the rip cord because of health problems – now he names the specific trigger of his decision. “Nine weeks ago I had a pretty severe hearing loss,” said the manager of “Zeit”.

Doctors had ordered him to rest because of the stress, and he then had to act in the interests of the group. “Doing a job like this over a period of months at half performance is not possible. That does not do justice to the company, to the 230,000 employees and to my own responsibility towards myself and my family. “

Since December 1, the long-standing head of the tire and automotive supply divisions, Nikolai Setzer, has headed the Executive Board of Continental. He has to continue to steer the difficult conversion of the DAX company from classic technology such as hydraulics and combustion engines to more and more software, electronics and components for electromobility.

In the group there was recently a heated argument and deep distrust of parts of the workforce towards the management. Because Conti will also be cutting thousands of jobs in “old” areas in the coming years. Trade unionists and several politicians accused the leadership of clear cuts and poor coordination and communication.

Many top managers practiced a kind of “permanent high-performance sport,” said Degenhart of the newspaper. But the health consequences of the exposure often remained a taboo subject. “The more fragile the situation, the less trust there is in a team, the greater the risk of trying to conceal health problems. (…) Admitting mistakes is a strength in a culture of trust. Admitting mistakes in a shark tank will not be of benefit to you. “

Degenhart’s contract would actually have run until August 2024. At the end of October, however, the former manager of the major Conti shareholder Schaeffler gave health reasons for his withdrawal. While the works council had sharply criticized the cuts, the major shareholders called for an even more determined austerity course. RICS: Reform of the public building law to reduce the urbanization...

Schalke: Kolasinac waives most of the salary – no loan fee...

The downhill run for women in Cortina d’Ampezzo