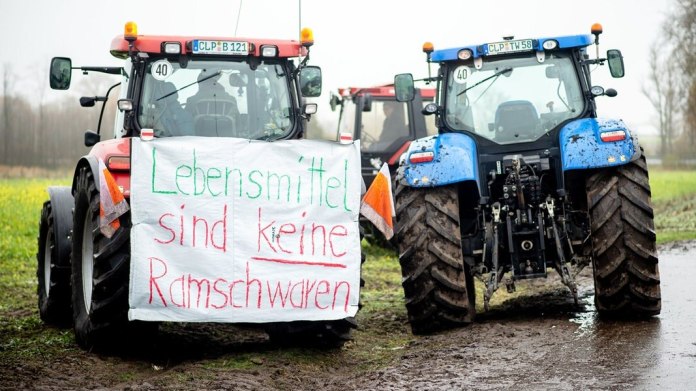 The discounter Lidl, which belongs to the Schwarz Group, responded to the farmers’ ultimatum, which ended at 8:15 p.m. on Friday evening with an explanation. “The situation in agriculture presents us all – farmers, processors, grocers and consumers – with extraordinary challenges,” it says. As a grocer, Lidl could not solve the problem on its own. “In order to sustainably improve the situation in agriculture, courageous steps are required on the part of politicians, processors and our competitors, and we will expressly support them”, the discounter continued. Lidl wants to face this challenge and takes its responsibility seriously.

Farmers are demanding better producer prices in the long term

The farmers have not yet commented on this. It is unclear whether and when there will be further protests or blockades. The farmers had previously rejected the offer of 50 million euros that Lidl wanted to make available in the course of the coming year through the Animal Welfare Initiative. That is not what you want, said a spokesman for the NDR in Lower Saxony. They did not want subsidies, but a system change towards better producer prices in the long term. The farmers’ initiative “Land Creates Connection” even spoke of a pure marketing campaign. Ultimately, each company would only cost 192.31 euros. “A ridiculous sum with which the holes in the factories cannot be filled,” she judged.

Farmers have long been asking for more money for their products. They have now vented their displeasure. (01.12.2020) 2 min

The President of the German Farmers’ Association (DBV), Joachim Rukwied, described the Lidl offer on Friday in a press release as a “consolation”. “Because of the ongoing price war, our farmers lose this amount almost every week,” he said. However, that is by far not enough, you need a fundamental change in the cooperation, says Rukwied.

Farmers want to get out of the “permanent low price culture”

Federal Agriculture Minister Julia Klöckner (CDU) once again emphasized the need for an understanding between traders and agriculture. “One possibility for this is a code of conduct with which the trade gives itself its own rules for fair cooperation. I suggested that yesterday,” she said. The farmers’ association demanded a clear voluntary commitment from the trade to exit the “permanent low-price culture”. On Thursday evening, the farmers had received calls from Lidl regional managers. An emergency summit with the other discounters showed that Aldi, Rewe and Co. do not want to move, said a farmer’s spokesman.

In the past few days, farmers in Lower Saxony, Schleswig-Holstein and Mecklenburg-Western Pomerania blocked several Lidl stores. After the end of the blockades, however, they had clearly stated that they were ready to intensify the fight and to block the warehouses of all discounters at the weekend.

The head of the Schwarz Group wrote to colleagues and the Minister of Agriculture: He is calling for an “urgency summit”. (03.12.2020) more

The farmers want to maintain the blockade of the access to the Lidl central warehouse. There are also protests elsewhere. (01.12.2020) 2 min

Atrium European Real Estate Limited / RESULTS OF THE CHOICE TO...

Not just a storyline: Lacey Evans is expecting her second child...

Smart Home: openHAB 3 brings a fresh structure for the control...

Fight against virus mutation: leaving Tyrol only with a test

Covid-19 vaccination strategy is in place – people at particular risk...

Environment of the still-first-lady: Melania Trump only wants to go home