A 55-year-old from the Braunau district was hit by a train with her car at a level crossing and killed.

According to the police, the woman drove her car on Feldweisstraße from the center of Schalchen towards Unterlochen at around 7 p.m. At an unrestricted level crossing secured with stop signs, the woman overlooked the train coming from Braunau and crossed the Braunau-Steindorf railway line without stopping.

The car was caught on the passenger side, got stuck on the buffer and was dragged along for about 180 meters. The 55-year-old suffered fatal injuries and had to be rescued from the car by the Schalchen fire brigade using rescue shears. The driver, the train attendant and the five passengers were not injured. The railway line Braunau – Steindorf was closed to train traffic for about two hours.

Virologist Ciesek expects relaxation, but not a miracle – miscellaneous things... 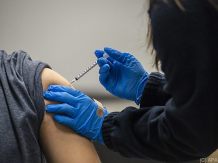 Vaccinations start in Japan six months before the Olympics – Politics...