The euro started the new trading week on Monday with a somewhat firmer tendency. Around 8:30 a.m., the common currency cost $ 1.2143, slightly more than on Friday evening ($ 1.2114). The European Central Bank (ECB) set the reference rate on Friday at $ 1.2127.The euro has recently received support mainly from the prospect of corona vaccinations soon and the associated good mood on the financial markets, commented a market observer. The dollar as a global reserve currency is therefore less in demand. That gives the euro a boost.

The Brexit negotiations over the weekend made no progress. The prospects for an agreement before the end of the transition period at the end of December are therefore rather poor, according to the Helaba analysts. On the market side, however, an agreement is still considered possible and so the British pound can hold its own.

On the data side, too strong impulses are not expected at the beginning of the week – the data calendar is only sparsely filled. Production data from industry in the eurozone could most likely meet with interest. An increase is expected for October. The industry is less affected than the service providers by the latest corona wave and the associated restrictions.

Isn’t Apple working on its own car?

Munich fails with an urgent application against curfew 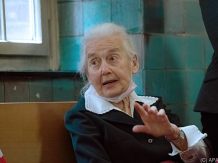 Corona in Brandenburg and Potsdam Japanese “Hayabusa2” capsule: back on earth after six years