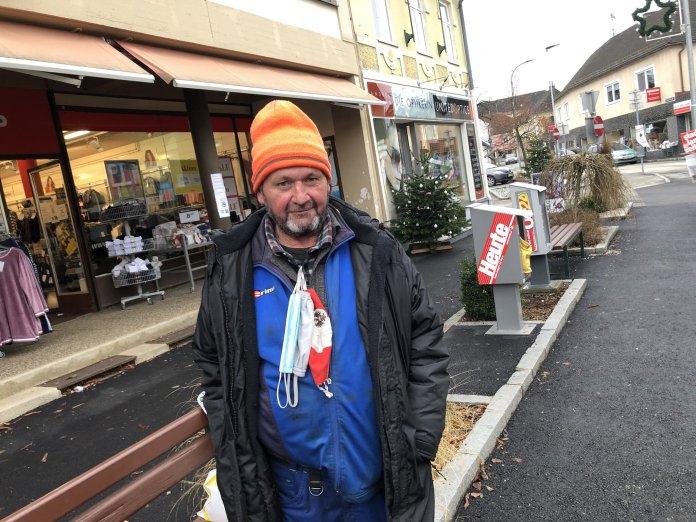 He was in the construction industry, earned well, the well-known dropout lives on the main square, sleeps in his apartment.

WALDVIERTEL. Orange-yellow hat, gray beard, friendly to everyone, that’s how you know him. He “resides” here all day, meets people, spends the time in the community of residents who come by. His life is four meters long and one meter wide – a bench and a disc chest (with a name on it).
The last Christmas he was with his banker, between the telephone booth and the Christmas tree on the main square. People brought him presents, warm food, beer … The mayor at the time also brought a bottle of wine over.
Isak is always there, even on Christmas Eve. But this year it is different, from 8 p.m. the curfew also begins on Christmas Eve.
Isak is actually called Gerhard, is a unique item in size. Siegharts. Almost everyone who drives by waves to him. Somebody is just bringing a nice warm jacket over. He puts them together. “I have to have them washed, the neighbor does that,” he pays for it, “because she has to buy the washing powder too.” He gets a lot for free, which he puts everything neatly on top of each other in his small apartment. He never smokes in the rented apartment. “Otherwise the things smell like smoke.”

Well earned in the past

Next to him is his window chest, where he bought beer and grapes, etc. The loner ended up here after his girlfriend died and he lost his job due to illness (he doesn’t talk very much). His life got off course.
Of course, rich is relative. But he has already earned well in the past, ATS 40,000 a month, “80,000 on a double salary,” he adds. At that time he once had almost a million ÖS in his account. He owned a condo. A broker sold it to him at high prices (not quite 600,000 ÖS). He later sold them at a great loss. Today he lives in a small rented apartment.
“He’s someone you can get everything from. There are no break-ins because Isak sees everything. He also takes care of the children,” a passerby tells us. When a man vehemently demanded money from her child (8) on the way to school, he helped the boy (he didn’t have one) and chased the man away.
His mother died at the end of November. Isak is on the party, that’s what everyone has called him since childhood, it is a variant of the biblical name Isaac. Meaning: God laughs. This year he’s home alone for Christmas, starting at 8 p.m. “People put things on the bench – nobody takes anything from them there,” says the passer-by. While we’re freezing, he shows us why he’s not cold. “You have to put on several layers,” he laughs. He likes to share and wants to send us suitable sweaters so that we are also warm.

Bill Kaulitz about Nena: “I was in love immediately”

Nina Proll: “I don’t believe in the infantilization of women”

Misfortune on the market in Halle (Saale): man is in mortal...

Dominik Paris: “It’s not that smooth yet” – Alpine skiing

New measures at Zurich schools – mask requirement from the 4th...

The 5 coolest Christmas films for Christmas Eve in Carinthia –...

Investment in The Hempany GmbH