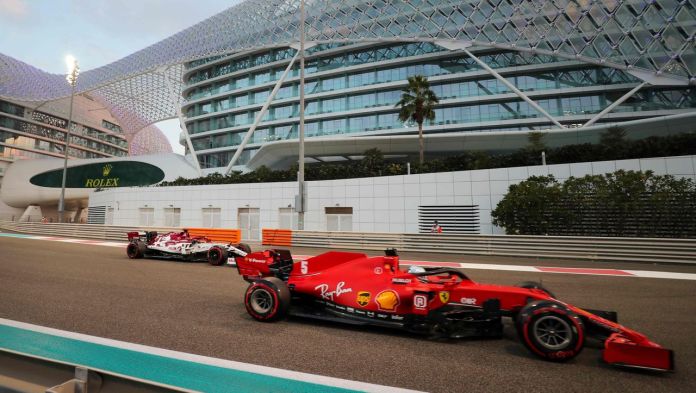 Sebastian Vettel retired early in qualifying for the Formula 1 season finale. On Saturday in Abu Dhabi, the Ferrari driver did not get past 13th in the last race for the Scuderia. The 33-year-old missed the targeted top ten in qualifying in the United Arab Emirates and is also facing a difficult task in his 118th race for Ferrari. “I gave everything I had,” Vettel said on the pit radio. The four-time world champion missed a starting position among the top ten for the 14th time in the 17th race of the season.
Leading the field will be Red Bull driver Max Verstappen, who relegated Valtteri Bottas and the world champion Lewis Hamilton, who returned after his corona infection, to positions two and three with a 0.025 second lead. For Verstappen it was the third pole position of his career and the first of the season. In Abu Dhabi, for the first time since 2013, no Mercedes is at the fore.
“I said before qualifying that we could make the last statement of the season here, and we are on the right track,” said Verstappen. But today we’re satisfied. «In the current season, apart from Verstappen, only Lance Stroll at Racing Point had managed to displace Mercedes from first place on the grid. The Englishman Lando Norris, who secured fourth place on the grid in Abu Dhabi in the McLaren, also caused a surprise.
In the race on Sunday (2.10 p.m., TV: RTL, Sky) it’s still about who will be runner-up behind Hamilton. Bottas has the best chances with 205 points, but Verstappen (189) can also climb to second place.

One of the most popular smartphones today for only 165 euros

Football: Bayern crowned the top season with the sixth title

Despite the crisis: Many companies are looking for employees

Berlin & Brandenburg: Lockdown is coming: Schools, daycare centers and many...