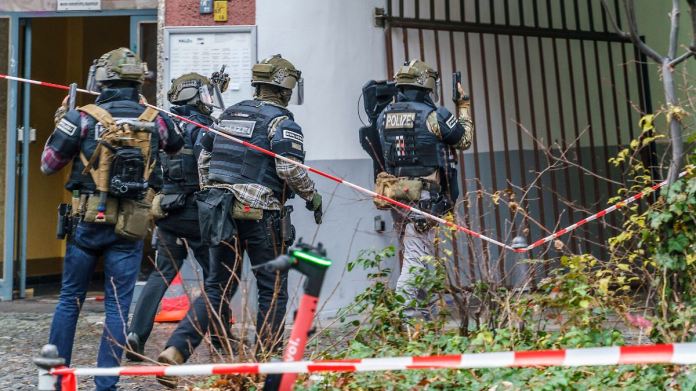 In the night from Boxing Day to Boxing Day, shots were fired in the middle of Berlin-Kreuzberg. Four men are hit. The police suspect a dispute in the area of ​​organized crime. Now the Attorney General’s Office has issued two arrest warrants.
After the organized crime shooting in Berlin-Kreuzberg, a court issued arrest warrants for two men. These were issued against a 30-year-old for attempted murder in three cases and against a 39-year-old for illegally carrying and possessing a firearm, as the public prosecutor’s office in Berlin announced in the evening on Twitter. Both suspects were seriously injured in the hospital.

Early on Saturday morning shots were fired in Stresemannstrasse in the immediate vicinity of the SPD party headquarters. The public prosecutor’s office assumes that the shooting involved a crime in the context of organized crime. Four men, aged 30, 39 and 42, were seriously injured. According to the current state of knowledge, residents alerted the police. The emergency services found three injured at the alleged crime scene. A fourth injured man jumped into the nearby Landwehr Canal, from which rescue workers pulled him out.

In Berlin there are always disputes between individual groups or families. Most recently, after a 29-year-old was shot in Kreuzberg, there was an attack by around ten men on a ground floor apartment and a car. In February, a shooting at the Berlin Tempodrom in Möckernstrasse, not far from the current crime scene, caused a sensation with one dead and four injured. The police were on duty with a large contingent, including homicide. An arrest warrant for manslaughter was issued against a 48-year-old man who is said to have shot a 42-year-old and was seriously injured in the confrontation.

Ex-FIFA President Blatter on the mend

How Czech commuters influence the number of infections