The women from Linz AG Froschberg found out about their group opponents at the Champions League tournament in Sportpark Lissfeld on Wednesday. In Group B, Austria’s top team will start on Thursday with a home advantage against Metz, Girbau-Vic from Spain and the Hungarian representative Budaörsi. The second red-white-red club TTC Villach has to deal with St. Quentinoise from France and the Czech team Hodonin in group C of three.

While Linz, led by Sofia Polcanova, is heading for the third Champions League title as second on the seeding list behind Berlin eastside, the hopes of the Villach women have received some decisive dampers in advance. So after top player Ivana Malobabic’s CoV-Out came the news that Lyudmila Kiriza from Russia cannot enter either. On top of that, Kiara Segula was injured in a car accident. So there are only two players left: Anna Fenyvesi and Bettina Feuerabend.

Formula 1, GP of Bahrain with Vettel & Schumacher: Column by... 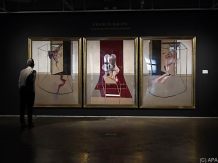 Art market relies on online auctions in the corona crisis –...